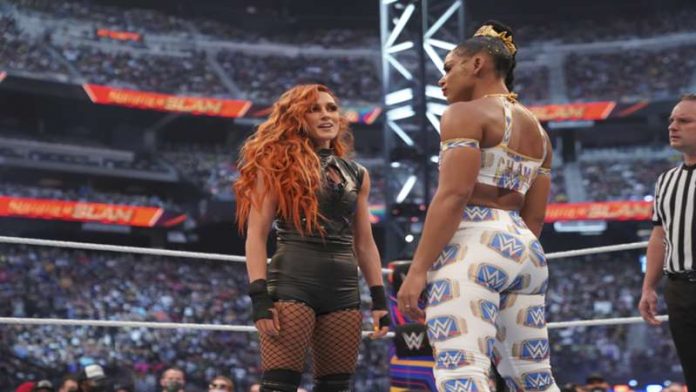 The WWE draft took place recently, shuffling up talent across the Raw and Smackdown brands. While the wrestler picks for each show won’t take effect until after the Crown Jewel pay-per-view in a week and a half, the question must be asked, does it really matter?

In truth, I haven’t been a fan of the draft or brand extension as it was originally called since it was introduced nearly two decades ago. In short, the concept of only certain talent on certain shows becomes too inside baseball so to speak for the casual fan. When someone from the general public ask, “who’s the champion?” they want an answer about who the top guy is, not an explanation about what belt belongs to what show. It sounds petty, but the average person doesn’t want to have to research anything to figure out what’s going on for each brand. When professional wrestling was at a peak in the late-90s, viewers knew when they tuned in to Raw or Nitro that Stone Cold and Goldberg were the top guys in the company. Sometimes the simplest strategy is the most effective option. On the flip side, one of the many reasons the Brawl for All was such a disaster was even now, nobody is sure what the rules were for the bouts. Some fans are still trying to figure out what “shoot promo” Scott Steiner was trying to cut on Nitro.

Granted, there was a relatively short period of time, particularly in the aftermath of the WCW buyout and the shutdown of ECW where the WWF roster was flooded with wrestlers so it made sense to restrict some competitors to only one show because that allowed more TV time for more wrestlers on another show. It was still a concept that was too diluted for the general audience, but you can see the logic behind it. While the WWF didn’t do much with almost any of the former WCW talent, and very few ECW guys actually got a chance, when you take a peak at the 2002 roster, a time before a major portion of those same athletes were released, the WWF had considerable roster depth. To put it in prospective, Hogan, Nash, Hall, Booker T, DDP, Rob Van Dam, The Dudleys, Lance Storm, Stone Cold, The Rock, Kurt Angle, Triple H, Chris Jericho, and others were all on the roster at the same time. That’s not to mention the OVW crew that arrived shortly after with future top names like Batista, Lesnar, Orton, and Cena.

The problem is, that was 20 years ago and despite the tremendous amount of talent on the current roster, in terms of star power, a brand extension to allow for more TV time isn’t really necessarily, especially when there are more hours of programming now than in 2002.

The original concept of “brand competition” was a tough sell because it wasn’t as though fans were only going to watch one brand. Granted, Raw was deemed the entertainment based show, while the blue brand had “the Smackdown six” under Paul Heyman, but did anyone really only watch one brand? You can’t really sell it as brand competition when it’s all the same company. Thankfully, the premise of brand competition isn’t a focus of the draft, but at the same time, what’s the point?

I don’t mean this in a sarcastic way, I just haven’t figured out what the major selling point is for the draft? Why does it matter what show Becky Lynch is on? Again, it’s not as though the fans are only going to watch one show, and based on the sluggish ratings, Smackdown doing better numbers than Raw is because of the added clearance of Fox as a broadcast network so the amount of viewers that are willing to watch WWE programming isn’t based on the brand since the ratings have eroded to more of a core of viewers that watch sports entertainment on a regular basis anyway.

If the selling point of the draft was to create new match-ups, that makes sense on the surface, but you have to remember that for literally every brand extension, talent eventually ends up wrestling on both shows anyway to try to boost ratings so the point is moot. That underscores the major problem with why a draft hasn’t and won’t work, because there isn’t enough star power on the roster to justify exclusive shows. Regardless of how many times the draft touts exclusive brands, when the ratings slip, there will be some goofy invitation rule, which dilutes the concept even further, that will bring talent to both shows.

More importantly, the draft doesn’t really change anything within the company because enough names are shuffled around that the same amount of titles as well as roughly the same amount of main talent eventually land on each show. Roman Reigns has the Universal title on Smackdown so obviously Drew McIntyre, who was drafted to the blue brand, isn’t going to win the WWE title at Crown Jewel because Raw will still need a main event title on the show. The same can be said in some ways for the women’s division, as Charlotte went to Smackdown and Becky was drafted to Raw. It goes without say that the champions are some of the top talent in the company, but if their plans in the draft are predictable then again, what’s the selling point?

The most important question is, will the draft help create new stars or at the very least provide the opportunity to create new stars? If not then the entire concept is cannon fodder while the company secures record-setting revenue through its mega TV deals, but as I’ve written several times, did WWE brass take the short-end money in exchange for building toward the future?