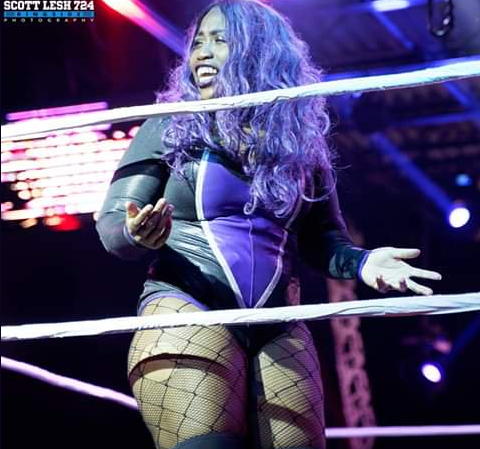 In 2019, female empowerment is at the forefront of several different aspects of society. Women take a more substantial role in sports, music, politics, and entertainment. Names like Amanda Nunes, Serena Williams, and Beyonce are mainstream figures within their chosen fields. Professional wrestling, a unique blend of athleticism and show business, is no different as recent years have rightfully given female athletes the chance to shine on the proper stage they deserve.

Almost as unique as the genre itself, the grappler known as Double D’Rose made her way to the ring last month for a Shine 56 pay-per-view bout, sporting her purple hair and matching gear. The streaming event was a part of the WWN Network, the parent company of Evolve Wrestling, and the live crowd in New York saw D’Rose victorious over her opponent that night.

As unique as the Georgia native is in her presentation inside the squared circle, her discovery of the sport was actually very typical. During the peak of the boom period of popularity of the Attitude era, she stumbled across her siblings watching the televised mayhem and became obsessed with the variety of colorful characters that appeared on-screen.

“I remember I peeked in my brothers’ room one night while they were watching it, and I was immediately hooked,” she explained.

Despite the extensive history of the sport in her home state with names like Gordon Solie, Dusty Rhodes, and Tommy Rich a part of the fabric of Georgia wrestling, the aspiring competitor searched to find a training school that provided equal opportunity for women to learn the same routine as the male students.

“There weren’t many wrestling schools in Atlanta except for a couple. The first training school I went to turned out to be a waste of time until I met my former trainer, Jay Fury. He told me about Platinum Championship Wrestling, and how they treated the women just like the men,” she explained.

After she laced up her boots for her debut in 2010, D’Rose spent the early stages of her career as a learning experience each time she stepped through the curtain, honing her craft through a variety of roles and personas inside the squared circle. She also knew the value of the knowledge that could be gained through the travels of the independent circuit, zigzagging the state of Georgia and then branching out to several other places since that time. Chicago, Maryland, and Florida are just some of the additions to her resume from her time inside the ring ropes.

“One of the main things I’ve learned in wrestling was, to always tell a story. You can have all the awesome moves, but if there’s no reason behind it, who cares?” D’Rose commented.

As unique as she is, D’Rose found herself as a perform in recent years, using social media to further establish her persona. Creating the “buns of steel challenge,” D’Rose allows her peers to smack her seemingly indestructible backside with a steel chair, a concept that was inspired by one of her favorite stars, Rikishi.

New #BunsOfSteelChallenge will rock you!
…it almost rocked the #WOAD, but I'm still undefeated! pic.twitter.com/9RMeUCXB59

“I like to think the WOAD is original in its own, but I definitely had influences. Of course, with Rikishi being number one. I like to think I’m a modern day female version of him,” D’Rose said.

With a bright smile that compliments her caramel complexion, D’Rose accentuates and embraces her one-of-a-kind traits in an effort to be an original, another very important aspect of her career that she credits to another of her major inspirations, legendary Muhammad Ali.

“Muhammad Ali inspired me to always stand for what you believe in, even if it’s alone. I’ve always admired his fighting spirit.”

In recent years, the purple-haired athlete elevated her profile significantly, working for the top women’s groups in the United States, including the previously mentioned Shine, Shimmer, and Rise. The additional notoriety allowed her obtain multiple championships in a variety of promotions and work alongside some of the more well-known female athletes in the sport such as Su Yung, Mercedes Martinez, and others.

“I love wrestling for WWN, it’s an amazing experience and a great platform for the world to experience the WOAD live. Whatever happens, whether I get signed to a major company or stay on the Indies, just know the wrestling world will know who the WOAD is, ” she explained.

An animal enthusiast when she’s not in the ring, D’Rose still cites professional wrestling as her main propriety, as studying the sport remains a part of her regularly routine. Double D’Rose proves that not only originality, but the tenacity to chase a dream are keys to success. After she started on the local circuit in her hometown, pro wrestling brought her to big stage of New York City, where she performed for a packed house on a pay-per-view broadcast. One of the most unique athletes in independent wrestling, D’Rose certainly personifies the female showcase that will have a major role in the sport this year.