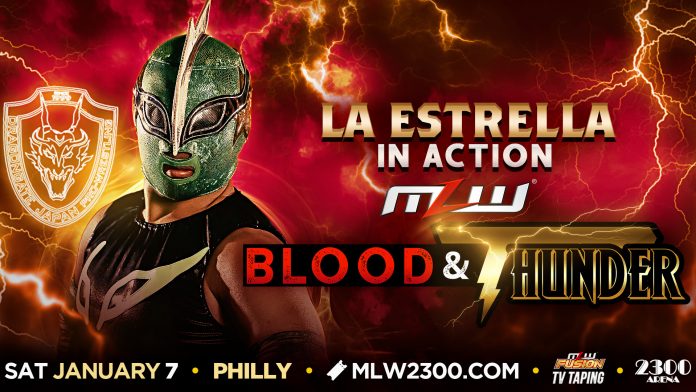 Major League Wrestling announced today that DragonGate star La Estrella has been added to the “Blood and Thunder” event on January 7th in Philadelphia at the 2300 arena.

La Estrella expressed his gratitude to MLW in regards to his return to the promotion.

La Estrella last appeared for MLW at Battle Riot IV back in June 2022. MLW and DragonGate recently renewed their working relationship which will see talent exchanges between both promotions.

The opponent for La Estrella has not yet been named for MLW’s “Blood and Thunder”.

Here is the complete press release from MLW:

(PHILADELPHIA, PA) – Major League Wrestling today announced DragonGate’s La Estrella will be in action at MLW Blood & Thunder this Sunday, October 30 at the 2300 Arena in Philadelphia.

The card is a FUSION TV taping, airing on beIN SPORTS nationwide on cable and dish, streaming on Pro Wrestling TV, and in over 60 countries around the world.

The bridge between MLW and DragonGate extends this January as La Estrella makes his Philadelphia debut at Blood & Thunder.

La Estrella is one of DragonGate’s most promising stars. A cutting edge high-flyer Estrella mixes Japanese wrestling and lucha for a thrilling blend of blistering speed and innovation.

A high-caliber middleweight, league officials are in talks with several middleweights about a potential big fight for Philly with Estrella.

La Estrella’s goal is simple: represent DragonGate with excellence and, perhaps win gold in his campaign of combat in America.

Who will La Estrella square off against?

Some of the athletes and talent signed to compete and appear include:

Plus MORE wrestlers will be announced soon at MLW.com.

The schedule is as follows:

MORE ABOUT THE VENUE