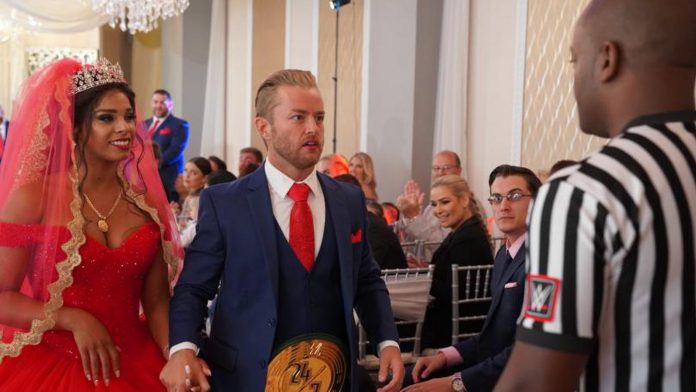 WWE uploaded a video on Friday where R-Truth pinned Maverick at the 205 Live General Manager’s real-life wedding to capture the 24/7 Championship for the sixth time.

Moments after getting married to Renee Michelle, a WWE referee appeared in front of Maverick, who was wearing the 24/7 Championship. R-Truth then appeared out of nowhere and rolled Maverick up from behind to win the title. Maverick chased R-Truth, but the video ends.

Reacting to the incident on Twitter, Michelle said she wants a divorce.

I can’t believe he allowed this to affect our wedding day! He is obsessed. The hell with this 24/7 thing!

I WANT A DIVORCE! https://t.co/bdoAaANX1G

Maverick won the 24/7 Championship from R-Truth on this week’s episode of SmackDown LIVE. Dressed up as Carmella, Maverick pinned R-Truth outside the Citizens Business Banks Arena in Ontario, California.

Maverick and Michelle got married on Thursday. Michelle is a wrestler herself, or at least was. Her last match took place a year ago today, on June 22, 2018. She most notably competed in the 2017 Mae Young Classic, losing to Candice LeRae in the first round.