Dustin Rhodes appeared on Talk Is Jericho to discuss a variety of topics.

During the podcast, he discussed his younger brother, Cody, who left AEW for WWE earlier this year after founding the rival promotion.

“Kind of down a little bit, but you know, Cody is still young. I mean, there’s such an age gap, 16 years, so he’s kind of in his prime now. But watching him return at WrestleMania was just huge, and you know, I’m not going to miss any of his stuff. He’s on the rise to become a champion. I really think he’s set the tone for that in his last eight years of work and things that he’s done that he’s built up. He’s very professional. He’s very different than I am. We’re two completely opposite people. I mean, he has that creative mind like my dad had. I’m more the grunt, the worker, in the family, but he is surpassing everything. He’s doing amazing. It’s great, but yeah, I wish he was still here.” 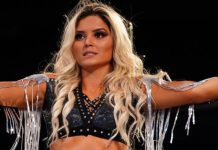