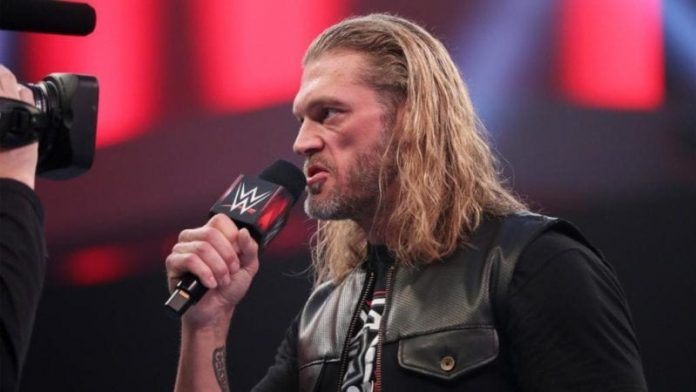 During a recent interview with Comicbook.com, WWE Hall of Famer Edge commented on his recovery from a triceps injury, who he wants to work with, and more. You can check out some highlights from the interview below:

On his recovery: “I don’t know, it was a month yesterday. It’s so hard to tell in that initial kind of two months where it’s at and where everything is. I’ve always been happy with the fact that I rebound from injuries pretty quickly. I got back from a torn Achilles in six months which is kind of stupid. But you know I’m also older now so I don’t know what that means. I’ve never had a surgery in my 40s so I don’t know how quick I recover anymore, I guess is what I’m saying. So I don’t know. I honestly don’t know. One thing I have learned is rather than rushing back I need to listen to my body and I need to listen to my body more I think. Even with the Backlash match, my arm was sore going into it but I didn’t realize, I didn’t think anything was going on, it was just a little sore. Okay, well that makes sense. When I got the surgery the doctor said there was a pretty good chance it was partially torn going into the match. I didn’t know that, I just thought my elbow is a little sore. But when you’re a wrestler, stuff gets sore, that’s what happens. So I just need to listen more I guess. Back to the point of how long? I don’t know I’m just going to listen to my body and truly listen to my body, make sure I have self care, which I never really paid attention to before. Whether that entails yoga, cold plunges, saunas, whatever that is, I just need to do more of it, especially being 46 now.”

On having a lot of talent he wants to work with: “It’s super exciting. One of the main reasons I wanted to come back is really to try and help a new generation of guys who I can get in there with and have some fun with and hopefully teach too. I was really really fortunate that I was able to get in with the Ric Flairs and the Shawn Michaels and the Undertakers and the Jerry Lawler and the Terry Funks and the Dory Funks and the Tom Prichards. All of these names that helped me, Bad News Brown, Rick Martel, they all helped me. It was their experience that helped me. So when I look at it and I look at this whole new crop of talent, I just think hey maybe I can help some of these guys. That’s super exciting. That being said, it had to start with Randy (Orton) because I had to find my comfort level and see where I was at, see if I could still truly pull this off at the level that I wanted. With him as the opponent, I knew, A, he’d be able to test me. But that he’s such a pro. I needed for my own confidence to get in with somebody that I know so well first. So I think we need to see that trilogy through, that needs to happen. Then, man, it’s wide open. I’d love to wrestle everybody. If I look at NXT. I look at Finn Balor, I’d love to get in there with him, Damien Priest, Keith Lee, Johnny Gargano, Ciampa, there’s so much talent down there. I’d love to show up at a TakeOver. Then I look at Raw and again there’s just so many talented people so it’s Aleistar Black, it’s Andrade, and Garza, the Viking Raiders, Ricochet, and Cedric (Alexander)…And then I look at Smackdown and I say, okay well Reigns has got to happen and back to Raw, Rollins has got to happen, and then there’s AJ (Styles), then there’s Cesaro and there’s Nakamura, get back in there with Sheamus again, Drew (McIntyre). I mean, it’s really wide open and that’s super exciting. It is a really really exciting thing. I also love the idea of not just the matches but the promos and trying to help some talent discover new layers and new places to go with their character in the context of promos too. That’s all really fun stuff.”

On wrestling without a crowd: “It is super challenging (wrestling with no crowd). I’d like to say oh yeah, it’s no problem. But it is challenging on so many levels. I think it’s challenging for the announcers. When do we lay out? When do we talk? It’s a different thing that we haven’t had to deal with before. I think now everyone’s kind of finding the pocket of what it is. But initially it was just so unheard of, how do you do this? How do you do it right? How do you do it wrong? I don’t think there is a right or wrong, you just got to start throwing spaghetti at the wall and see what sticks. That’s where you get a Boneyard Match. It’s like, that was great. Okay, we can do that. Okay well we’ll have a little bit more forgiveness from the fan base with things that clearly are shot cinematically. It’s a difficult prospect, it really is. I can’t wait until audiences are back. It’s just, honestly it’s so much more fun. As a performer, as a live performer, as a wrestler, you feed off of those reactions. When those reactions aren’t there, it’s still fun, it’s still the dream gig, but that’s what you work for is those reactions. When you don’t hear it it can kind of take you out of it a little bit. It hurts a lot more too (not having adrenaline). You get your natural adrenaline and survival mode but it’s still just not the same as that roar or when you know you’ve got them in the palm of your hand. That’s just such an amazing feeling. So I can’t wait for that because the Rumble was just so great and it felt so good. Just hearing and feeling that audience again and in that realm, then you go to silence off of that. The Rumble felt like, all right I made it to the top of Everest, nine and a half years back, that baseball stadium reaction, and then the next match is in front of no one. So it’s strange. But, you have to just make the best and try to pull the positives wherever you can. That’s I think what the industry as a whole has tried to do.”