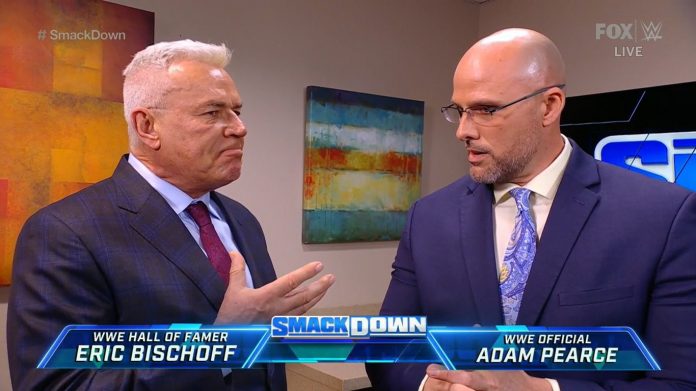 – WWE Hall of Famer Eric Bischoff took to Twitter and responded to criticism over his appearance on Friday’s SmackDown on FOX episode.

SmackDown saw Bischoff make a surprise appearance during a backstage segment with Adam Pearce and Sonya Deville. Fans knocked Bischoff on Twitter, calling him a “sell out” for working for both WWE and AEW in recent years.

Bischoff responded to the one fan who called him a “sell out” and wrote, “And your grasp of grammar/spelling reflects a sad prospect of your future. I’m good with my life, and hope the best for your.”

Another fan commented that Bischoff is the “biggest money hungry guy ever” for going back & forth between the two companies. Bischoff responded, “I’m a mercenary.”

Bischoff also responded to a tweet from Pearce, and a tweet from Conrad Thompson. You can see the full tweets below, along with footage from the segment:

And your grasp of grammar/spelling reflects a sad prospect of your future. I’m good with my life, and hope the best for your. https://t.co/jZv75FNpQD

Rae was shown in the front row during the rematch between Natalya and Aliyah, which saw Aliyah get a win for the second week in a row. Rae was trending on social media for how she was introduced on commentary as a WWE Legend. The former Total Divas star actually received a pop from the crowd as she was introduced from Nashville, where WWE was at. The “WWE Legend” line led to some criticism on Twitter, with many fans pointing to how Rae was more known for Total Divas than anything she did in her singles career.

Rae tweeted a post-show video and said, “I’m seeing so many complaints that WWE called me a Legend tonight. I don’t make the rules, y’all. They said what they said,” she commented.

Rae had a brief staredown with Natalya during the appearance. They will both compete in the 30-Woman Royal Rumble Match later this month.

As seen below, WWE also released a post-show video of Rae taking another shot at Natalya, while also putting over some of the younger talents such as Xia Li, Aliyah and Shotzi.