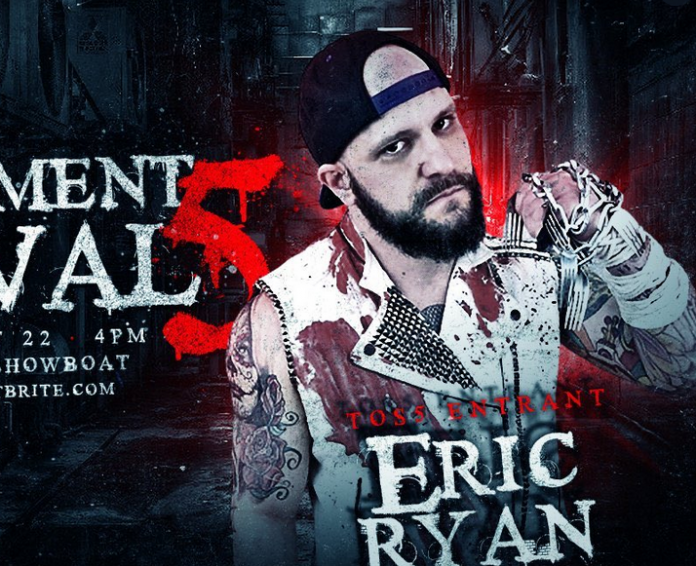 Last summer, grizzled Ohio veteran Eric Ryan achieved the pinnacle of his personal goals in the sport of professional wrestling, something that he worked toward for nearly the previous 15 years. Long car trips for meager to no pay, performing at sparsely-attended small cards, and striving to make it to the next level after working on the dirt-stained canvases of the local circuit culminated for him. After almost a decade and a half, Ryan found himself in Korakuen Hall, the Japanese version of Madison Square Garden and one of the most storied professional wrestling venues in the world. In the span of just a few days, he worked a series of matches in front of an enthusiastic Japanese audience, including a bout where he stuck a fork, one of his trademark accessories, into the skull of Jun Kasai, widely regarded as one of, if not the greatest deathmatch wrestler of all time. He might’ve been on the other side of the globe, but the Cleveland native felt right at home.

“It was the greatest experience, professionally and personally. The Japanese culture is something everyone should experience. There’s still so many places I want to see and so many people to fight. It’s a wonderful place,” he explained.

But, Eric Ryan went from a professional high in Tokyo to a personal low when he landed back in the United States less than a week later.

While the hardcore grappler was spilling blood and smashing opponents with light tubes on Game Changer Wrestling’s tour of Japan, his mom wasn’t feeling well and scheduled a doctor’s appointment. A few tests later and the terrible news was confirmed, Mrs. Ryan was diagnosed with breast cancer. Thankfully, after ten rounds of radiation, Mrs, Ryan is cancer free, specifically because the disease was detected early, another example of how important it is for women to schedule regular screenings.

Initially devastated by the news, Eric Ryan remains exponentially grateful that his mom made a recovery so he looked to use his notoriety from the independent scene to help those that are still fighting the battle of breast cancer.

As mentioned, Ryan, a natural risk taker and adrenaline junkie, carved a niche for himself in the underground genre of death match wrestling, a style that originated in Japan through Atsushi Onita’s Frontier Martial Arts Wrestling organization, founded in 1989 and held events through 2002. Ironically, Onita, who began his career as a traditional wrestling prospect for the legendary Giant Baba’s All Japan group, was first exposed to the primitive concept of hardcore wrestling during his excursion, a trip to learn different styles, to America when he worked for Memphis territory in the early-80s. The rowdy rasslin of the Tupelo concession stand brawl made an impression on him. A trip to Puerto Rico is where he saw barbed wire involved in professional wrestling and he took the concept back to Japan with him.

The way that the United States inspired Onita, the foundation he built with barbed wire, fire, and explosion matches bled over into the American independent scene, as grapplers in the United States continue to perform that dangerous bouts for a diehard demographic. Similar to so many of his generation, Eric Ryan watched grainy bootleg VHS tapes of Onita’s death matches, as well as the promotions that were a spinoff of the FMW concept. His earliest recollection of the Japanese mayhem was footage of the IWA King of The Death match 1995 tournament, which was one of the most famous events among tape traders, but the version he found had The Insane Clown Posse’s spoof of commentary as a voice over for their infamous “Stranglemania” series.

“Death match wresting was something I was always a fan of. My style definitely evolved into a more aggressive style. Obviously ,with the death matches, but also with how I approach each match. A lot older. A lot wiser,” he commented.

While a myriad of scars decorate his back today, a reminder of the risk stunts he does inside as well as outside of a ring during performances, Eric Ryan broke into the industry in a much more typical way. He started under the Mega Championship Wrestling banner, a small, but established league in his home state, beginning his career in the usual indy fashion of a participant in a battle royal or basic tag matches as an addition to the show.

After a decade in the industry, Ryan felt like he had more to offer and wanted to strive for more, attempting to leave the biggest mark he can on the business.

With traveling and logging the miles in the car is an essential part to get noticed on a wider basis, Eric threw his boots and his gear bag into the trunk whenever his friends were booked to work on cards out of state. Through a series of coincides and being at the right place at the right time, Eric Ryan finally got the chance to perform in the type of bouts that drew him to professional wrestling in the first place.

“They guided me towards the shows and it all fell into place after that. Plus, I enjoy them more now,” he remarked.

So, just over five years ago, Eric Ryan began to slash, smash, and pummel his way onto the death match landscape, making a name for himself in the process for wild brawls and bloody battles. He zigzagged across the independents with appearances in Absolute Intense Wrestling, Combat Zone Wrestling, IWA Mid-South, Game Changer Wrestling, and other groups.

However, as mystical as the cloud of dust from the glass shattering of a light tube might be, the risk of injury is a very harsh reality. Sometimes, mere inches could determine the end of a career.

Just a few weeks prior to the previously mentioned tour of Japan, Eric Ryan brought a shopping cart to the ring for one of his GCW bouts. During the course of the match, Ryan took a particularly rough landing on the cart, but soon realized the situation was much, as a piece of metal had was stuck in his lower back. As he was momentarily stuck, the gory scene made even the blood thirsty GCW react with audible concern.

“A piece of the cart went into the lowest left portion of my low back. I was a fourth of an inch away from puncturing one of my kidneys and colon. It left quite a nasty hole and some bruising, but I got stitched up and went to japan 20 days later,” he said.

1/4 inch away from puncturing a kidney and have a small fracture in my pelvis. How was your Friday? pic.twitter.com/9m6pNDdvmm


Despite the close call, the risks over the past five years were worth the reward, as Eric Ryan has since paired up with four of his real-life close friends to form arguably the most well-known faction on the independents today. 44OH consists of the longtime veteran Rickey Shane Page, the talented Atticus Cogar, Eddie Only, Gregory Iron, and Eric Ryan. The Ohio natives have been involved in a lengthy and hostile rivalry with Game Changer Wrestling, the most talked about organization currently in independent wrestling. Not looking for the typical applause and chants, 44OH enjoys the chance to generate animosity from the dedicated GCW fan base.

“It was formed by a long time bond between people. It’s something you can’t throw together. We all bring something different to the table and we’re our own unique personalities, but it works,” Ryan said.

The design is done and I’ve decided where to donate.

Money or insurance shouldn’t be a deciding factor. Let’s help those struggling get the preventative care needed. https://t.co/de82YwfBDg

I’ll post again when the shirt is live on big cartel. Thanks everyone 💚


Regardless of 44OH’s ability to incite an audience, the stable looks to use their notoriety and their schedule across a variety of promotions to contribute to a good cause. The 44OH logo t-shirt will be printed in pink in honor of breast cancer awareness month and the proceeds from the sales will be donated to different breast cancer charities to help as many different people as possible. Eric Ryan cites how fortunate he was for his mom to detect the disease early and remain cancer free after treatment so he looks to help others that are fighting chances with these fundraising efforts.

For more information about Eric Ryan and the release of the 44OH t-shirt fundraiser, you can follow him on Twitter @Ericryanpro