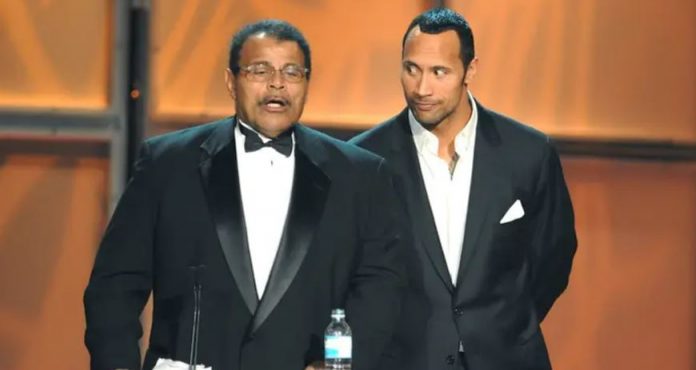 Five unidentified children that the late WWE Hall of Famer Rocky Johnson (Wayde Bowles) fathered while traveling North America as a professional wrestler have been made public by a recent exposé.

Greg Oliver of Slam Wrestling in Canada wrote the extensive article on the Sports Illustrated website. Although none of the now-adult children were ever publicly acknowledged by Johnson, the parentage has been verified by DNA, it was stated.

The stories of Lisa Purves, Paula Parsons, Adrian Bowles, Trevor Edwards, and Aaron Fowler are detailed in the SI article. Lisa is looking for any further children Johnson fathered and left behind because she thinks there may still be some of them. With some background in the film industry, Lisa has been putting her project—a documentary about the family situation—to work.

Johnson had brief interactions with several of his kids, and when his 18-year-old daughter Lisa called him, he hung up. Johnson made promises to visit others over the phone but never followed through. After Johnson passed away in January 2020, the kids started communicating, and Johnson’s brother Ricky Johnson (Jay Bowles), a former professional wrestler, welcomed them as nieces and nephews. Regarding bringing the siblings together, Ricky appears to play a significant role in the story. It was noted that Rocky made no effort to link up all of his kids.

The five children hold Johnson’s other son, WWE Legend Dwayne “The Rock” Johnson, entirely blameless. Trevor recalls how The Rock rose to fame around the year 2000 and how he frequently received compliments on his appearance.

Lisa claimed that one of the reasons she stayed in Canada was to avoid running across her famous half-brother, who worked in the same field.

“I never wanted to run into Dwayne and have everyone know I was his bastard sister,” she remarked, adding that it took a mental toll when Rock visited Vancouver in 2017 to film “Skyscraper.” Everyone seemed to have a celebrity sighting story. She stated she fell into a deep depression, crying every day, feeling unlovable and unworthy of her accomplishment, and could “barely function” for months.

She makes sure not to blame Rock for anything today though.

“Every time I turned around, on the news: Oh, my God, Dwayne Johnson’s in town! I couldn’t get away from it,” Lisa said. “It’s not that I don’t like him. It’s just, when I look at him, I don’t see him. I only see that our dad loved him and not me.”

Rock has described his connection with Rocky as being “very complicated,” and all five of his half-siblings make it plain that this is not a story about them. In his 2008 WWE Hall of Fame speech, Johnson acknowledged Curtis and Wanda, two of his children from his first marriage.

If the five kids think about The Rock at all, they claim it’s mainly in the context of the child their father did embrace.

“All I ever saw on TV was Rocky talking about Dwayne and how proud he was,” Lisa said. “And it was really painful.”

Additionally, they admit that’s a Rocky thing, not a Rock thing. Adrian said, “Dwayne has nothing to do with the decisions that his dad made; he doesn’t even know who we are.”

“We just want to be recognized,” Paula said. “We sat on the back burner forever. [Rocky] was our dad just as well as Dwayne’s.”

According to Lisa, production is still being done on her documentary, which has the working title “Just Call Me Lisa.” She noted that Wanda and Curtis had rejected to work on the project, and The Rock’s crew had not responded to her request. As for the personal insults Lisa has already received because of the movie, she stated, “I’m [talking about this] now because I have been silent my whole life about what hurts me the most. It’s time to finally have my voice heard, so I can be free of my painful past.”

In addition to the three children he recognizes, Ricky added that Rocky was aware of more children he may have fathered. Rocky’s failure of those other children caused friction in their friendship, according to Ricky. The children were also not addressed in Rocky’s “Soulman” autobiography, which did not mention their tag team.

“We talked many times, just me and him, one on one,” Ricky said. “We fought about [the way he treated his family], argued about it. That’s the way he chose to live his life.”

As of this writing, The Rock has not made any public comments regarding the story.