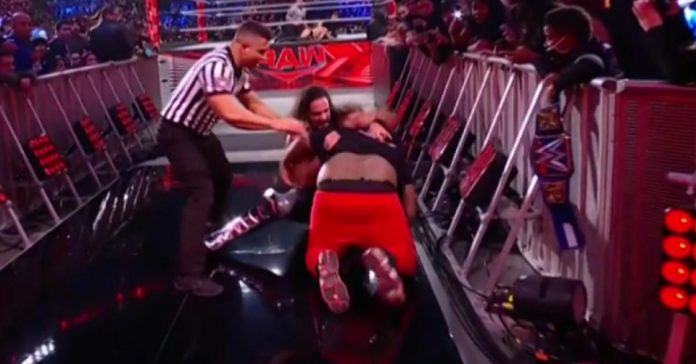 As PWMania.com previously reported, Seth Rollins was tackled by a fan that jumped the barricade during the November 22nd 2021 edition of WWE RAW.

Elisah Spencer, who has been charged with attempted assault, posted a video statement on Tuesday and also issued comments to nydailynews.com regarding the incident:

“I apologized to the WWE for my actions. I had a legitimate beef but as a grown man I could have settled it a different way … If I saw him today I wouldn’t attack him. I’ve moved on.”

“My plan was to help Finn Balor. I’m a fan. I like his aura, his attitude. I like everything about his charisma. I like everything about him. I jumped from where I was sitting at. I ran and speared Seth Rollins. I busted his lip open and he caught me in a headlock. I broke the headlock and I was trying to get him, then the referees and the security guards broke us apart.”

Spencer also talked about how he was catfished by someone pretending to be Rollins:

“He was asking me to send him gift cards in exchange for money, mostly $500 or more to see if I was loyal. He asked me to be a wrestling blogger for him. I wanted to work my way up.”

Spencer said that after buying about $3,000 in gift cards, the check from the person claiming to be Rollins ended up bouncing.