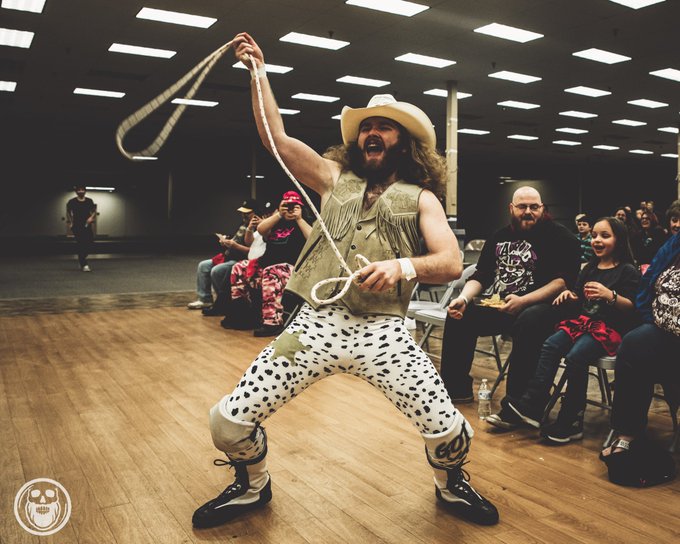 You only get one chance to make a first impression.

As cliche as that might sound, sometimes a statement becomes a cliche because it’s true. Any form of entertainment is based on the connection that a performer has with their audience. Theater, music, combat sports, or any other genre of live entertainment brings a paying audience to see a performance. Ironically, professional wrestling blends all of those categories for a presentation that is uniquely its own.

But, what about those that are hitting the “stage” of the squared circle for the first time? So many pursue the industry because of a passion for the art form, but how do they handle the pressure of that first time through the curtain, especially in a social media age, where viewers can be far beyond those that are in the building at bell time? There are numerous pro wrestling moments that have gone viral online, some for all the right or all the wrong reasons.

For a 21-year-old aspiring grappler, his moment to debut in the sport came just a few weeks ago when a last-minute replacement was needed on the card. The youngster had very recently completed his training course and showed up at the venue that afternoon to work his usual shift as a part of the ring crew, waiting for space on the organization’s schedule for a proper debut. However, when opportunity presents itself, especially in professional wrestling, being prepared is a key to success in the business.

Those in attendance at Ryse Wrestling’s February 12th card arrived at the revenue with the expectation of action from talented stars like Tony Johanson, Joey Sunseri, and others. They would find out when they were in their seats what the rookie found out just a few hours early, Cowpoke Paul, an energetic real-life rancher would have a chance to make his first impression on professional wrestling.


“I saw Cowpoke Paul develop from his first bumps to now. There are a number of people training in multiple schools in the area right now so, unfortunately, sometimes new talent can become a blur or lost in the shuffle. However, I always noticed Cowpoke. Never missed a practice, never missed a ring crew, never had to wonder where he was or if he’d show up ready to work. He, very quietly, became the one of the hardest workers in the room. When we had to make a change to the card on short notice; there was no question in my mind that he was ready,” said Chris Lerusso, a nearly twenty-year pro and head organizer of Ryse, a blue-collar league that runs events in Western Pennsylvania.

“It was crazy. I was glad that the crowd seemed to be as excited to see me as I was to see them,” said Paul, who competed against longtime tri-state area competitor Edric Everheart for a bout that was captured by Mike Sorg, the most professional producer of sports content in Pittsburgh.

The butterflies and the nervous energy that Cowpoke, clad in chaps, boots, and traditional cowboy hat, felt moments before he stepped through the curtain are very common.But, his path to sports entertainment was anything but typical.

When the COVID pandemic shutdown the entire world in mid-2020, nearly everyone found themselves stuck at home. Pro wrestling, from the global level to the local indy circuit, was shuttered. After nearly a year of strictly tending to the family farm, Paul realized something during the shutdown, time and opportunity can be a rare commodity so he didn’t want to waste the chance to pursue pro wrestling, a sport he had a passion for since a very young age.

“There wasn’t much to do and I think we can all agree that was a rough time for a lot of us. When things were sort of letting up, I really just wanted an excuse to get out of the house and meet some new people,” he remarked.

Paul did some research on training centers in the area, a region known almost as much for its wrestling as the steel it once produced, and settled on the Stronghold Academy, a small outfit run with a tight-knit crew under the direction of Brandon K, a 25-year veteran of the scene.

“I figured if you want to be the best you got to learn from the best! But, in all seriousness, he’s a great guy and an even better trainer. On top of that, he runs a great school. From the moment I walked in there everyone was super nice and welcoming. It felt like everyone there really cared and wanted me to succeed,” Cowpoke commented.

“A young wrestler needs a solid base and a good support system. You also need the heart an drive to consistently improve your skill set, mind, and body,” said BC Steele, regarded as the best manager in Pittsburgh with 21 years of experience.

After about a year of consistent lessons, which included the tedious process of landing on the canvas to learn the safest manner possible to prevent injury during bouts, and the repetition of perfecting maneuvers, Cowpoke was ready when opportunity presented itself to him at the previously mentioned bout that was held in the Uniontown Mall in Uniontown, PA. As the music played, the youngster experienced a whirlwind of emotions, knowing that once he stepped into the ring, it was the beginning of a completely new chapter for him.

“I was thinking a lot of things before I got out there. I was thinking about how much time and effort it took to get to that point. I wanted to make proud, as well as the few I wanted to prove wrong. I was really hoping that my pants wouldn’t rip while I was out there, or that I would trip over my lasso. On top of all of that, I was trying to figure out how to come out of all of this with a win,” Paul explained.


The organic energy and excitement exuded from the newcomer and the crowd immediately identified with his enthusiasm as chants of “Cowpoke!” echoed through the building just minutes after the opening bell. Throwing hay and russlin’ cattle surprisingly translated to the ring for Paul as he used his natural strength as an asset inside the square circle, as well as a level of poise not often seen amongst rookies. Cowpoke came up short in his first bout after some underhanded shenanigans from his opponent, but he accomplished success with his connection with the audience and his overall athleticism that has pundits already touting his potential in the future.


“I know I want to do it to the best of my ability. I know that no matter what I do, or where I am, I want to entertain the people that payed to be there. That’s really what it’s all about for me. Other than that, I do want to get out there and wrestle in as many states as possible. Traveling around and meeting new people,” Cowpoke said.

How far Cowpoke Paul progresses in the world of professional wrestling remains to be seen, but in some ways, he’s already a success story. When the bleakness of the shutdown had so many dealing with tough circumstances, Paul put his mind to a goal and achieved it with his official start in the sport. Furthermore, he entertained the paying audience, which is key for any form of show business. The full story of Cowpoke Paul has yet to unfold, but with the fans chanting his name, Cowpoke Paul certainly made a good first impression on professional wrestling.