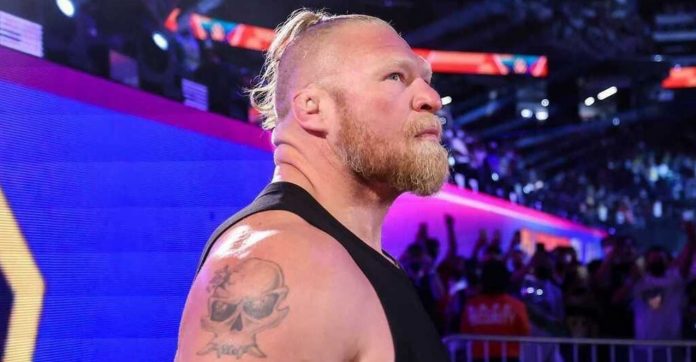 Brock Lesnar’s refusal to collaborate with Jinder Mahal in 2017 was discussed by Road Dogg during the most recent “Wrestling Outlaws” podcast with Chris Featherstone and Vince Russo. In an effort to develop Mahal into a star for the Indian market at the time, WWE pushed him as the main eventer.

Lesnar and Mahal were supposed to compete in a non-title champion vs. champion bout at Survivor Series at the time. According to Road Dogg, Lesnar’s refusal to collaborate with Mahal was the reason the match was changed to Lesnar vs. Styles.

Road Dogg gave the following reasons why Mahal vs. Lesnar was postponed, “Brock said, ‘I’m not working with him.’ Look, he said that about several people, by the way.”

When Russo questioned Road Dogg about whether he believed Mahal was capable of working with Lesnar, Road Dogg responded, “I don’t think so. Brock’s on another level. And so if you get somebody else that’s on, like, I don’t know that he’s on another level in a way where he could carry a Jinder Mahal title match and make it look competitive. I don’t know that he’s on that level. But yeah, I don’t think Jinder could do it. You call it an experiment, Chris. And I honestly think it was a summer experiment. And when Brock came back and said, ‘Okay, what are we going to do?’ We’ll do whatever we want to until Brock comes back, and then we’ll get the title on somebody to work with and we’ll have a main event match.”

Road Dogg commented on what Jinder was lacking to compete against Lesnar, “Look, I don’t think just like I think the fans kind of viewed it, it wasn’t a great creative decision. I fought it as hard as I could. But that was the decision that was made. He was going to be champion. Now look to Vince’s point, we dressed him up and put those Bollywood Boys with him and we did everything we could do and looked beautiful on television. It didn’t have any substance, you know.”

When questioned if the India market played a role in Vince’s decision to award Mahal the WWE Title, Road Dogg responded, “Look, that’s what I assumed. I know what happens when you assume but that’s what I assumed and I don’t think that’s a bad idea. You know what I mean? What if it took off? What if it did something at the biggest market on the globe? You know what I mean? Like it’s not a bad roll of the dice because ratings were still pretty decent during it all because we did have other great stuff underneath.”

Road Dogg also said that it was a cool moment when AJ Styles replaced Jinder Mahal.

You can check out the complete appearance below: