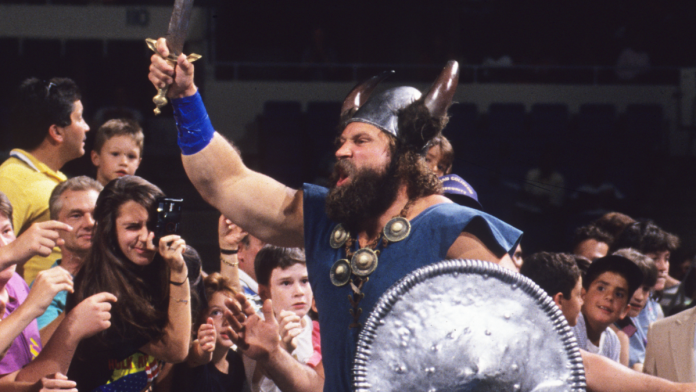 John Nord, who was known as The Berzerker in WWE, got arrested last month for multiple traffic violations in Hennepin County, Minnesota, including drunk driving.

Independent wrestler and interviewer Hannibal planned to interview Nord last week at WrestleCon in New York City, but couldn’t because his arrest prevented him from traveling there. Nord was also advertised to attend last Sunday’s Markout At The Meadowlands wrestling/football fan convention in Secaucus, New Jersey.

According to public records, Nord got arrested at 5:23 p.m. on March 23 and placed in custody. He got charged on two counts: one is a felony charge for driving while intoxicated/operating motor vehicle under the influence of a controlled substance, and the other is a gross misdemeanor for driving after his license got canceled.

Law enforcement deemed Nord “inimical to public safety.” That means a driver who has been found to be unable to safely control their vehicle but without presenting a serious danger to others. However, licenses are canceled as inimical to public safety when drivers are deemed to pose too great of a risk to others, which forfeits their legal ability to continue driving.

Nord got placed on a 60,000 bond for the felony DWI charge. It is not known if Nord has posted bail as those who organized the Markout At The Meadowlands event were told that he was not allowed to leave Minnesota.

Nord, who is 59 years old, started out wrestling in 1984 for Mid-South Wrestling under the ring name, The Barbarian. He joined the AWA in 1985 and became known as Nord the Barbarian and later, Yukon John.

Nord is best known for his time with WWE, which lasted from 1991 through 1993. He was initially introduced as The Viking but quickly became The Berzerker with Mr. Fuji as his manager.

The Berzerker’s preferred method of winning matches was by throwing his opponents over the top rope for a count-out, all the while holding his wrist, licking his hand, shouting “Huss! Huss!”, and falling flat on his back.

The Berzerker’s most memorable feud was with The Undertaker as he attempted to stab him with his sword on the April 25, 1992 episode of WWF Superstars.

The Berzerker scored his biggest win on the July 6, 1992, episode of WWF Prime Time Wrestling as he outlasted 39 competitors in a Battle Royal.

After leaving WWE, Nord competed for All Japan Pro Wrestling and had a brief stint with WCW in 1998. Going under his real name, Nord bleached his hair blonde and wore a T-shirt to the ring that read “If you don’t like me .. there’s something wrong with you.”

Nord mostly wrestled on WCW Saturday Night and WCW WorldWide, with his lone appearance on WCW Monday Nitro taking place on the first Nitro of 1998 in a victory over The Barbarian. Nord had a six-match winning streak that ended with a loss to the undefeated Bill Goldberg on the July 4, 1998 episode of WCW Worldwide. The loss was Nord’s last television appearance and he left WCW shortly thereafter.

It’s unclear if Nord continued wrestling after leaving WCW. Since leaving wrestling behind, he’s continued living in Minnesota and is rumored to have been working at an auto dealership.