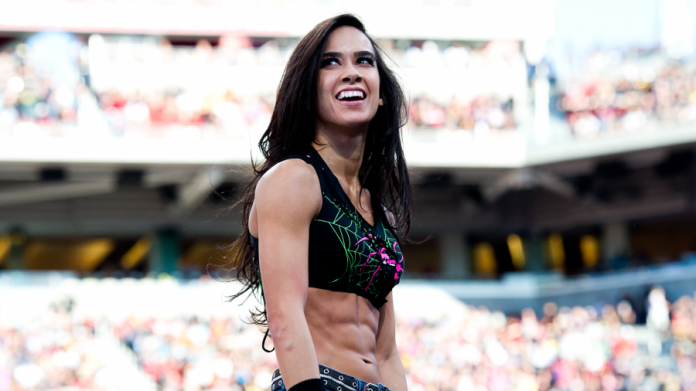 Ariane Andrew, who was known as Cameron in WWE, joined Ring the Belle to talk about her five most iconic moments in the sports-entertainment organization (as determined by fan submissions).

At Elimination Chamber 2014, Cameron beat AJ Lee in a Divas Championship Match via disqualification. Tamina interfered to save AJ’s title reign, eventually laying out Cameron at ringside in front of the referee to give the Funkadactyl a hollow victory.

Recalling the match, Andrew said, “It was very nerve-wracking. I feel like I had a lot to live up to for the simple fact it was supposed to be Naomi, but with her being hurt it’s like I took her spot, which it gave me an opportunity but it was definitely nerve-wracking. It’s like wow, I’m being put in a position where you have to shine.”

When asked what it was like working with Lee, Andrew replied, “I plead the fifth, just gonna leave it at that. We’re just gonna have a moment of silence because wrestling fans are gonna hate me out there.”

Andrew, however, then discussed working with Lee.

She continued, “You know she did make a huge impact in the division, but what I will say I respect her and her work ethic and what she’s doing now with her books and stuff. For someone who was new, I wish I could have had someone who was a little bit more guiding and not just kind of like leave me out with the wolves. That was what it was kind of like with dealing with her, major tough love.

“I don’t want to throw her under the bus or anything, it’s just was me being so new I would have expected someone to not show up at the ring five minutes before doors are about to open. You know what I mean, especially when there’s a match this big, they didn’t even know if the match was gonna even happen.

“I must spill some tea here because she said she was sick. Her stomach was hurting, but then she told me to do my move where I dropped the leg on her stomach. So I was like, ‘Girl, I’m [confused]?’ I have to do my signature move, but if your stomach is messed up and your ovaries, why would you want me to drop my leg on yours?

“I spilled a little tea there, but again wrestling community, IWC, I have love for the girl! I respected how far and the impact she did make on the division. It’s just you know some people just can be a little difficult to work with sometimes.”

You can watch interview below.

WWE and Total Divas Star Ariane Andrew, f.k.a Cameron, is here on Ring the Belle for a juicy teatime. Join us as we count down fan-submitted Cameron’s most ICONIC moments.

We discuss her feud with The Bella Twins, AJ Lee, and her Funkadactyl partner, Naomi. Ariane also spills the tea about her rocky relationship with WrestleMania: her cancelled match and the wardrobe malfunction. We also discuss Cameron’s famous naughty school girl gear and the fabulous mirror spot that…we could be seeing sometime soon?

One thing is for sure about this interview: Ariane Andrew has some major announcement coming up and this interview is a huge foreplay for what’s big to come.