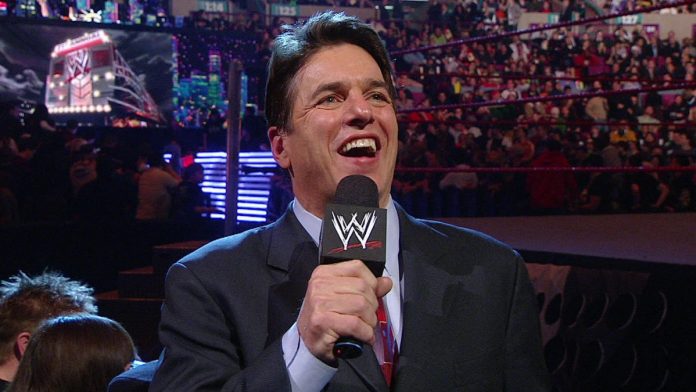 Former WWE writer Brian Gewirtz recently appeared on Chris Jericho’s “Talk Is Jericho” podcast for an in-depth conversation about various topics. During the discussion, Gewirtz talked about how the Hollywood guest hosts on RAW circa 2009:

“People don’t realize it lasted a year. I mean, that’s a long time. That was longer than the Invasion. It was longer than many, many title runs. I dedicated a whole chapter in the book to it. It was one of those things, you know, like everything, it starts out altruistic. It starts out with good intentions.”

“For those who don’t know, that was Mr. Jeremy Piven, one of the first guest hosts, in Mohegan Sun, so a tough East Coast audience out there, calling SummerSlam, ‘Summer Fest’, and the audience just absolutely hating life after that. Thankfully, there was Ken Jeong, Dr. Ken, who did his best to get heel heat, and then took a spectacular bump out of the ring, and banged his head on the steel steps after being told nothing bad would happen. But he was so psyched because he’s a huge fan. That helped him as well.”

“Sometimes you pitch an idea, not really understanding the implications of what you’re pitching. So for me, it was like, we were kind of tired of the heel authority figure. We felt we had done that to death. With Mr. McMahon, it was great. With Bischoff it was great. But then, you know, eventually it waned. Regal when he did it, he was great. But again, it’s so many heel authority figures that the formula, especially when you’re 52 weeks a year, and the babyface comes out and the heel puts them in a precarious position and what have you, it gets a little tiresome.”

“So taking a page from, literally, the Chris Jericho book, and knocking yourself down a level, I have the idea of Mike Adamle, the announcer, as the GM with the idea that he would be more like Michael Scott from the office. He had his own Summerfest moment when he started. He called Jeff Hardy, ‘Jeff Harvey’, live at the Royal Rumble, and fans immediately were like, ‘We hate you forever now.’ So like, what if it wasn’t a malevolent force as the GM, but it was just someone who was completely over their head and didn’t know any better and was trying to make friends with the boys, but creating disaster. It just seemed like it could be at least a different approach to the authority figure angle. But, you know, we didn’t put Mike in a position to succeed at all, because Mike is a sports broadcaster, he’s not really a character. You know, we were taking his real life foibles and kind of making it into a character. He’s a really pleasant guy and a great guy off camera and everything. But we were giving him so much exposition, and he eventually was reading it off a clipboard and everything. It was just pretty brutal, so we pivoted quickly off of that.”

“I proposed, like, what if it was a different WWE legend every week who is in charge? So you can have a mixture of babyface, heel, sometimes ambiguous. You don’t know what they’re going to do. Vince did like that idea. Then Stephanie added on to it and said, ‘We can even mix celebrities every now and then amongst the legends.’ For some reason, that turned into, ‘Dammit, we’ll have a celebrity every week.’ The quote was, ‘It will be like Saturday Night Live, only better.'”