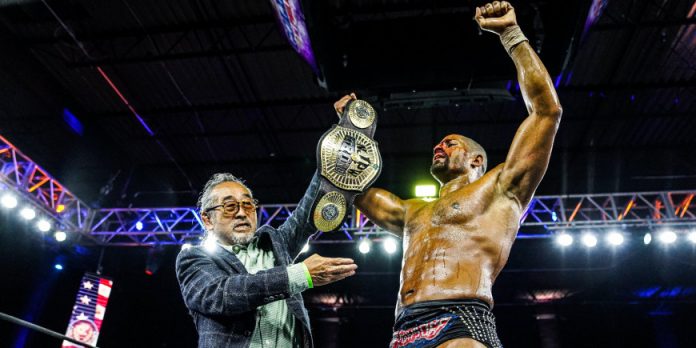 Fred Rosser recently spoke with the Comedy Store podcast for an in-depth interview.

During the discussion, the NJPW STRONG Openweight Champion spoke about possibly returning to WWE as a coach or trainer.

On how he would love to return to NXT as a trainer: “I would love to, I would really love to. I remember when (John) Laurinaitis took over, he called me up and asked me — he hired me in 2009 — when he took over for Mark Carrano, he asked me how I was doing. ‘I’m doing well, I’m with New Japan.’ ‘Yeah, I used to work for All Japan.’ ‘I’m doing well, I’m doing my thing.’ I would love to, I would love to go back to NXT because that’s where I started. I was on the original season of NXT so going back and helping elevate talent. Time ain’t on our side, I’m 38. I want to push it until the wheels come off, but who knows.”

On Norman Smiley asking him if he’d ever come back to WWE during WrestleMania weekend: “I remember seeing Norman Smiley during WrestleMania in Dallas and he said, ‘would you ever come back as a trainer?’ Yeah, I’d come back as a trainer, but I’m not ready for it. You’re not going to pull the plug on me, I still have more to do in wrestling. I would love to be a coach or anything like that.”

Check out the complete interview via the YouTube player embedded below. H/T to Fightful for transcribing the above quotes.