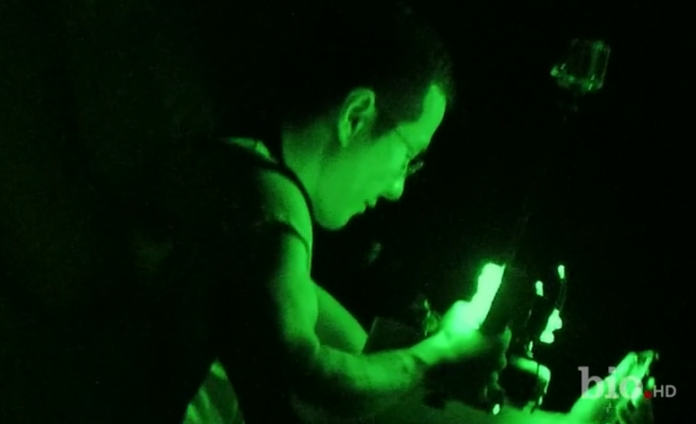 The world of professional wrestling is filled with an array of eccentric or unique individuals. Originating from the sideshow circuit, those that choose to pursue in-ring mayhem as a path into the entertainment genre are certainly a different breed of athlete. What could motivate New Jack to hurl himself from a balcony onto the concrete floor below? What was the thought process behind Mick Foley’s legendary dive from the top of the cell in 1998? How insane did Onita have to be to invent the exploding barbed wire match?

What fueled this madness?

The same questions could be asked for someone that willingly spends the night in the Lizzie Borden house, the scene of a grizzly axe murder in 1892 or the Villisca house in Iowa, the site of another axe-wielding incident in 1912. Who exactly would volunteer to provoke activity in possibly paranormal sites?

Ironically, the answer to both scenarios from these completely different entities is usually the same, for the thrill of the action and the entertainment of the audience.

Daniel Hooven, a thirty-something business professional during the typical week day, has a unique combination of experience from both of these very untypical ventures.

“I spent some time in the paranormal world, back in 2011 my friend was filming paranormal investigations for his YouTube channel. I helped out with a lot of the marketing aspects of his documentaries, the social media, and website primarily. At this time the paranormal entertainment industry was pretty hot similar to the wrestling industry during the Attitude Era and there were a ton of opportunities, which we took advantage of. We were selected to film an episode of Travel Channel’s paranormal competition show “Paranormal Challenge” which we won and ended up being chosen as the series premiere,” Hooven explained.

Not long after that initial television success, Hooven found himself at Slippery Rock University in Western Pennsylvania along with Justin Plummer and Shane Taylor, an unknowing foreshadow for him of events down the road, on the Sci-Fi channel to investigate some of the famous urban legends surrounding the school. After hosting segments for the paranormal TV side on the Biography channel in 2012, Hooven completed his Master’s degree in business and found opportunities within the corporate world of Pittsburgh, which put him on the successful path of his studies.

Still, the Philadelphia native that was a dedicated ECW fan looked for more of an adrenaline rush on the weekends so he went toward the sport that he was a lifelong fan of as a way to escape the mundane routine of the office as a way to branch out with another one of his hobbies.

“During my time in television I had become a big fan of photography and with my free time was looking for opportunities to develop my photography skills. I knew Justin from college and that he was involved in a professional wrestling organization, so I reached out one day asking if there was any need for a ringside photographer, he connected me with Chuck Roberts and I shot my first show at Night of Superstars 3 in April 2014. From then on I was fortunate enough to be join the production team full-time and will always be grateful to Chuck and Justin for the opportunity,” he commented.

Roaming around ringside capturing frames of the action made Hooven a familiar face at International Wrestling Cartel events, one of the most well-known organizations in the steel city. Being so close to the bouts sparked a thought he had during his youth, could he ever step inside the ring ropes as a wrestler? After he traded college text books for meetings at the office, he hadn’t even considered such a task after he progressed into adult life.

“For me, I really value being in physical shape so I started changing my personal training program a year out from starting formal training, I wanted to show up in the best shape possible to show that I really wanted to learn the craft. I feel like being older when starting has its pros and cons. As somebody with real-world work experience and life experiences, you have the maturity and patience to accept constructive criticism,” Hooven said.

As is usually the situation within the world of professional wrestling, the line between reality and entertainment can be blurred to further a moment for the audience. Hooven’s status of the IWC ringside photography was used to springboard an impromptu spot at an event in 2017. Soon after that, he made his official debut in the squared circle, which he considers a personal highlight.

My first match, this was a moment I had been always dreamed of and as my music hit and I came through the curtain, the whole thing was just super surreal and exciting. The match was a rematch for the IWC Tag Team Championships between the reigning champions, The Fraternity challenging myself and John McChesney. I will always be thankful for the opportunity to work with those men and all the advice they provided and continue to provide me to this day. They did more than they had to for a green guy and can’t say enough how much that moment meant to me,” Hooven remarked.

Since that time of finally lacing up his boots, Hooven maintains a strict workout regiment and continues his successful path in corporate business. As much as Hooven is known as an IWC product, his solid in-ring skills and enthusiasm have seen him become a fixture at various promotions around the tri-state area. A variety of regional championships decorate his wrestling resume and he continues to expand his horizons with new opportunities within the industry. While a “Wrestlemania moment” might not be in the cards for him, the story of Daniel Hooven is proof that dedication and determination can lead to success in a variety of different careers.