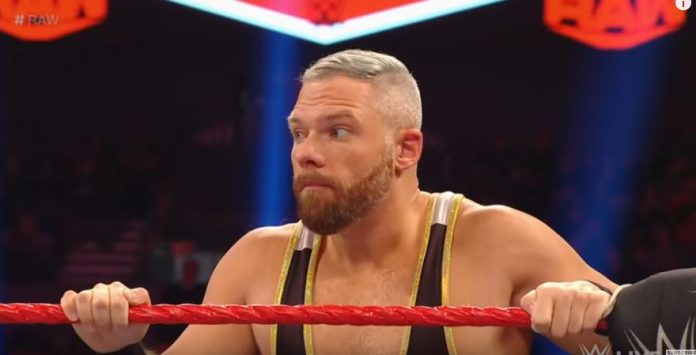 On an early December edition of Monday Night Raw last year, The Viking Raiders, powerful brutes that bulldoze most of the competition, were set to square against a pair of local grapplers, a makeshift team that drew the tough task of a match against the dominate Raw stars. The local hopefuls lasted mere minutes before the bell rang to halt the bout, but as is often the case in the world of sports entertainment, there was more to this story than what the audience saw on USA network.

One of the athletes that made his national television debut that night was Mark Sterling, a name fans already know from the podcast world as the longtime producer of The Major Wrestling Figure podcast, the audio platform hosted by WWE superstars Zack Ryder and Curt Hawkins that is dedicated to action figure fandom. Along with that, the Raw competitors film their adventures as they search through obscure toy shops during their travels, looking for rare merchandise to add to their impressive collection for a Youtube series, which Sterling also edits for the tag team. While “Smart” Mark laces up the boots to compete on the independent circuit on a regular basis, the production of video and audio content suits him just as well.

“I listened to talk radio and trained in media my entire life. My entire childhood was action figures,” he explained.

With a degree in the media arts, Sterling spent much of his youth with a diehard fandom toward sports entertainment, memorized by the larger-than-life personas of names like Ric Flair and the Macho Man. He had an equal amount of dedication toward his pursuit of film work. His drive to learn as much as he possibly could about the genre took him as far as a Masters of Fine Arts degree in documentary production, something that he considers a tool that transitioned to his work for the pro wrestling content he handles now.

“The Editing the podcast is not to hard, I just have to listen to it diligently. You know, these guys they’re in the public eye, I’m listening to anything that might be misconstrued. Editing the swears can be time consuming, but I enjoy the first listen of the finished episode. All the challenges I enjoy, but the most difficult thing is balancing time between that and real life. I think from the time I get the stuff, it takes me about six hours to do the Major Wrestling Figure podcast. The Youtube videos can be quick. If it’s an unboxing, if they send me the Raw footage, and it’s probably about 3-4 hours,” Sterling said.

Ironically, it was real life that jump started his path into the over-the-top world of sports entertainment. Similar to many of his generation in his younger days, he and his friends would emulate their wrestling idols that they saw on Monday nights during the Attitude Era, practicing clotheslines and elbow drops until it was suggested that they seek actual training to chase wrestling glory. Under the direction of Kevin Landry, a veteran that once trained under Dory Funk Jr., who ran an early version of a developmental program in the late-90s, Sterling and his pals learned the basics.

Prior to his plunge into the books of a college education, Mark even had a short stint as an in-ring wrestler, but knew school was more important so he shelved his aspirations of championships in favor of a college degree. Eventually, he landed a lucrative position with Supply House, an industrial supply chain, producing a myriad of video and advertising content for them.

“I really enjoyed it. I went to work and they paid me very well, I was artistic. There’s eight or nine videos that told the story of some interesting people in the trade. It was one of the most enjoyable things I’ve done,” Mark commented.

When Mrs. Sterling found out she was expecting a baby girl, Mark was overjoyed with the news of the addition to his family, but also reflected on the nearly forgotten dream that he paused nearly seven years earlier when he went to college. Wanting to give it another shot before he officially had a family, Sterling searched out a training center to refresh his in-ring skills, and realized that Brian Myers’ Create-A-Pro academy in New York was less than five minutes from his house.

So, in 2015, Mark climbed into the squared circle again to complete the tedious process of landing on the canvas safely and sharpening his skills on in-ring maneuvers. As he learned the ropes from an even more accomplished cast of trainers than he had previously, Mark wanted to use his media background to bring more of a spotlight to the WWE star’s Create-A-Pro promotion. He began producing digital content for the organization, which indirectly led to the role he would later have as a critical member of the action figure podcast team.

Zack Ryder, who is known for his almost insane dedication to everything from the prototype of a Rhythm and Blues Greg Valentine to original Star Wars figures, wanted to take the discussions he had with Curt Hawkins and present them in a podcast format. When Mark was scheduled for extra work at Summer Slam just a few years ago, he met Zack and talks for a potential project began. Mark was already familiar with the podcast platform because he and his buddies already started “Off The Hop Rope,” a show dedicated to a combination of specialty beer and sports entertainment.

In 2018, the Major Wrestling Figure podcast launched and in the nearly two years since then has garnered a cult follow, bringing along its own series of merchandise. With the Mac software at his disposal, Mark carefully edits the audio and video content for the show from his home office, which has memorabilia stretched across its walls. However, his producer duties have taken him on the road, as he is usually following the WWE tag team to toy shows and conventions to document their experiences for their Youtube channel.

When he wasn’t editing for the supply industry or for the Major brothers, Sterling was making a name for himself on the independent scene as the devious “Smart” Mark Sterling, a pompous villain that made his way to the ring in a graduation rope that symbolized the many degrees he obtained in higher education. He achieved success as the Create-A-Pro champion, but his involvement with the podcast put his name around for others to notice his skills.

“I think the podcast has definitely helped with some of the success I’ve seen recently because of the reach it has. When we started doing Off The Hop Rope, we were going to tryouts for Beyond Wrestling, but I’m one of their main roster guys now. I also think a lot of it has to do with marketing myself for promoters to see the reach it can have,” he said.

The story of Mark Sterling isn’t of someone that toiled on the independent scene to make it all the way to Wrestlemania because his tale of pro wrestling success has more layers than that. Sterling is an example that it isn’t always “all or nothing” in the often harsh sports entertainment industry. He found success in his chosen field before he went on to chase one of his passions in pro wrestling. More than anything, Mark proves that the chance to live a dream isn’t over until someone stops trying to achieve it. Mark Sterling dreamed his way to the reality of a match on Monday Night Raw.