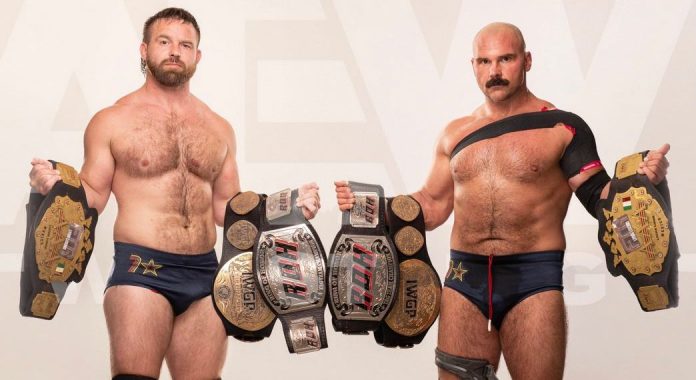 ROH, AAA, IWGP Tag Team Champions FTR recently appeared on the Battleground podcast for an in-depth conversation about all things pro-wrestling. During the discussion, they talked about their upcoming match with The Briscoes at ROH Death Before Dishonor this Saturday, July 23rd.

Dax said, “This is going to be a fight. All we want to do is make the people feel a certain way and I think that we do it better than anyone else. I think we’re more physical than anybody. I think that’s what resonates with a lot of people. They understand that we’re fighting for something and they feel like every match we have, we’re always fighting for something, and I think we are too. So I think going into this match, the only thing on my mind, you know, I can care less about star ratings. I don’t give a sh*t about making some kind of newsletter. I want to make people feel, and that’s all we’re all we’re worried about.”

Dax on if they would try to go after the NWA Tag Titles or Impact Tag Titles:

“If the fans think, and we think, NWA and Impact would add to our legacy, yeah. You know, the money has to be right and we gotta get the okay from the boss. Right now, we’re in a good place financially. Right now we’re in a good place mentally, kind of physically. So everything that we’re going to do from now on to the end of our careers is for our enjoyment and for our careers and that’s it. So, yeah, if it will add to our legacy, absolutely.”

“If everything lines up perfectly and it is something where it’s going to do good for bringing spotlight to tag team wrestling, bringing spotlight to us trying to make history, and possibly add another star to the collection, then I’m not going to rule that out, especially now they’re saying they’re (NWA) bringing back the U.S. tag titles.”