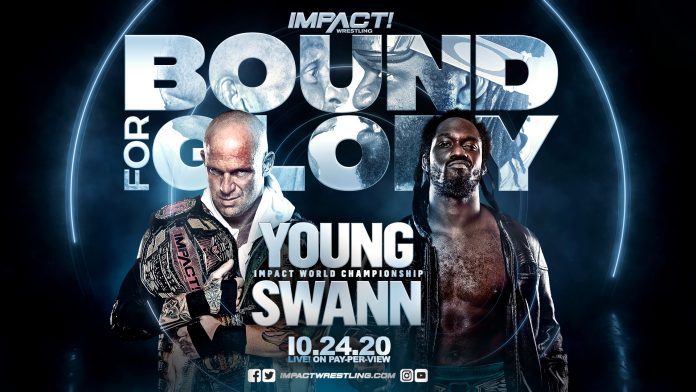 The press release also mentioned that every championship will be defended at BFG.

Below is their full press release with comments from Young, Swann and Executive Vice President Scott D’Amore-

LIVE ONLY ON PAY-PER-VIEW, SATURDAY, OCTOBER 24

The confirmation for this huge World Championship match came during last night’s IMPACT! on AXS TV. Swann stormed to the ring and demanded IMPACT executive Scott D’Amore grant him a shot at Young, the self-anointed “World Class Maniac” who had viciously attacked Swann in August.

D’Amore, who is IMPACT Wrestling’s Executive Vice President, said: “Fans should get ready for one of the most exciting matches in Bound For Glory history. Whatever people think about Young’s tactics since he’s returned to IMPACT, no one can deny he’s one of the best in-ring performers in all of professional wrestling.

“But, Eric is facing a very determined Rich Swann. This is the biggest opportunity of Rich’s career – a world title shot at IMPACT’s showcase event of the year. And, obviously, it’s a very personal match for Rich. When he asked – no, when he demanded this fight – I saw a look in Rich Swann’s eyes that let me know he’s going to deliver the performance of his life at Bound For Glory.”

‘Bound For Glory’ will be available on Pay-Per-View in North America at 8 p.m. ET on Saturday, October 24 on –InDemand, DISH, DirecTV, Vubiquity, Rogers, Bell, Shaw, Sasktel and around the world digitally via FITE TV (order now).

The former X-Division Champion had announced he was done with active competition just moments before Young’s sneak attack. Swann spent the first half of 2020 painfully rehabilitating his right leg after suffering a serious fracture in January and, frustrated when the leg was reinjured at July’s Slammiversary©, announced his retirement. Ironically, it was Young’s August 4 assault that made Swann determined to return to action and finally win the World Championship.

Swann said: “I really should thank this maniac for reigniting a fire in me that was beginning to fade during those months of endless rehabilitation sessions. I can’t describe the emotions I have going into Bound For Glory. I’m going to remind everyone, especially Eric Young, just how high I can fly. I will take the World Championship from Eric Young, mark my words.”

Young said: “Everything that has happened since I returned to IMPACT Wrestling at Slammiversary has unfolded according to my design … and Bound For Glory will be no exception. I’ve hurt Rich Swann physically, I’ve crushed him psychology and, at Bound For Glory, I will end him.”

Every IMPACT championship will be defended as part of what promises to be an instant classic Bound For Glory event. The full card will be announced in the coming weeks and don’t miss an episode of IMPACT! on AXS TV, Tuesday’s at 8 p.m. ET/ 5 p.m. PT.

BREAKING: @GottaGetSwann will challenge @TheEricYoung for the IMPACT World Championship on October 24th at Bound For Glory! #BFG2020