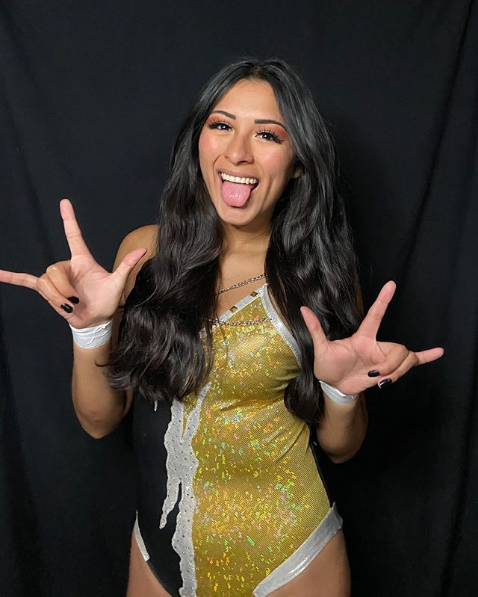 Delmi Exo confidently strides to the ring with enthusiasm in her eyes, as her lengthy dark hair contrast her bright smile, she knows she was tailor made for the squared circle. Despite her joy of make up and the ability to sew, she makes all her own gear that she’s attired in before she pummels opponents, she doesn’t follow any of stereotypes. Delmi is a pretty face, but she’s definitely not just a pretty face. In fact, during much of her youth, she found herself spending hours following the adventures of super heroes in comic books, eagerly thumbing through the colorful pages to find out the conclusion of the adventure. Similar to the majority of modern pro wrestling shows, she was also drawn to action movies where pyro surrounded the protagonist as he battled the villain.

Professional wrestling seemed like the perfect blend for her, as real life characters in colorful costumes fought the heels with morality or personal pride on the line in the pursuit of a championship. But, even though Delmi wanted to try to enter the unique world of sports entertainment, she wondered if there would be a place for her? Before the featured sports of the current era, the early 2000s still presented women as more of a mid-card spectacle than the potential main event so Delmi had her doubts about becoming a wrestler.

“I didn’t think I could be one because I was a girl and I saw how they were mostly models, even with Lita and Trish. The day my sister went to check out the wrestling school and signed up, I signed up as well and have been by her side ever since,” she said.

The two sisters had always spent time together, both to enjoy their love of wrestling and comic books so it made sense that they jump into this adventure together, but they soon realized a rather harsh reality check. The pyro on screen for their favorite wrestler’s entrance and all the glitz and glamour that went along with pay-per-view was far away from their introduction to professional wrestling.

“I trained in a barn when I first started. It was hot in the summer and frigid in the winter. Something I really learned in the beginning was to be humble. Also safety, anytime I had to learn a move my trainer always said to not be reckless,” Delmi explained.

The dusty barn offered no frills as the ring and dirt-stained canvas provided a chance for her to learn the basics and practice the fundamentals of the sport. Delmi’s real-life sister Ashley Vox, who would go on to form a tag team with her after their pro debuts, was right by her side as the two siblings completed the tedious process of landing on the canvas in the safest way possible. The musky squared circle didn’t make them feel like stars, but it gave the sisters a chance to discover their natural poise for the grappling arts. Their athletic and physical ability translated very well to headlocks and body slams. Despite how well-versed the sisters are as sports entertainers, they maintain that flying head scissors aren’t used to settle sibling disputes.

In the five years since Delmi stepped into that dilapidated barn, the sports she enjoyed so much as a kid has taken her to several different states, performing for many well-known independent organizations, including Shimmer, Rise, Shine, and many others. Among all of that, she considers winning the Shimmer tag team titles with her sister as one of the highlights of her career, but also recognizes the value of traveling to compete in front of different audiences as she evolves and an athlete. The long hours of travel and late night commutes back home after an event are worth it to her because she cites the ability to experience a new place as well as the learning experience of each match as some of the most rewarding aspects of her career.

More Sea For Your Star


“I’ve been able to pick up little things from people here and there, learn different styles. I also love getting to explore cities and hang out with everyone. I’m really happy with how far female wrestling has come. It makes me happy to be apart of it and keep the movement going for women.”

Last September, Delmi achieved one of her career goals, as he did a tryout for the opportunity to go to Japan for the women’s group Marvelous Pro and train with the legendary Chigusa Nagayo. The chance to travel to the country with such a storied history of professional wrestling gave her the chance to expand her in-ring knowledge and also enjoy the culture of another part of the world. Some might experience a level of culture shock or unfamiliarity in a foreign country, but Delmi found herself more focused and determined than another other point in her career. She knew that the Joshi system had produced some of the all-time great women’s athletes in the history of the sport and she wanted to make the most of the opportunity to learn as much in-ring knowledge as she could while she was in the country.


“Wrestling in Japan was like a dream. I was living and training in a dojo. Each day was challenging and exciting. I’ve loved Japan since I was little because I’m an anime nerd and love the culture. I felt a giant weight on my shoulders knowing a lot of my peers dream to go to Japan. I wanted to make them proud and not take it for granted,” she said.


Shortly after she returned from Japan earlier this year, the pandemic shutdown most of the United States and paused pro wrestling in many areas, but Delmi keeps herself busy with a variety of art projects, her trusty Batman comics, and TikTok content that entertains fans with her tribute costumes of the legends of the industry. Obviously, Delmi has a bright future in the industry, but perhaps the most important aspect of her story is the power of dedication and what can be accomplished when those with a dream believe in themselves enough to accomplish the goal.