For the first time I ever can remember, I thought more about Terry Bollea this week, than Hulk Hogan. I’ve been Hulkamaniac since I was seven years old. That’s 30 years of devotion to the persona that hooked me as a wrestling fan from the beginning. From the moment I watched Paul “Mr. Wonderful” Orndorff turn on the Hulkster to side with the Heenan Family on WWF Superstars in 1986 until late last week, the character of “Hulk Hogan” has been ever-present in my life.

As a child I trick-or-treated on multiple Halloween nights decked out in the signature red and yellow. As a teen an entire scene in my summer camp play was specifically written, just for me, so I could recreate Hulk’s signature ring entrance and pose down in front of the entire camp. (All 90 pounds of me and my four-inch pythons) As a professional in the entertainment business, my undeniable fandom led to a recurring role on the morning show I was producing at the time as the character, “Lil’ Hulkster” – even getting to do my signature “Hulk” entrance for Hulk himself one morning. And even as I write this now instead of the TV show I’m supposed to be writing at the moment, I sit at my computer, staring at a poster of “Hulkamania” that has followed me from office to office throughout my career. 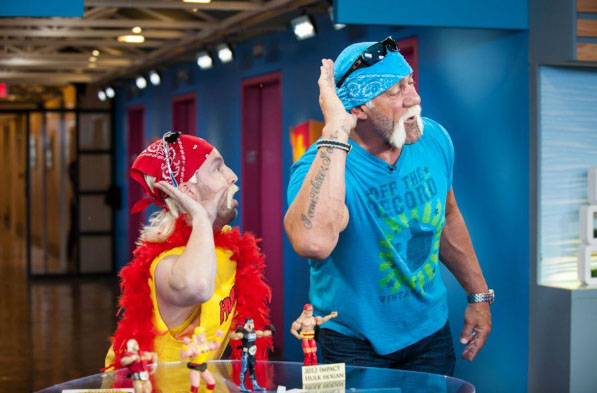 But then came last Friday when we all woke up to the news that WWE had severed all ties to their quintessential superstar for uttering multiple racial slurs during a portion of the now well-publicized sex tape he unknowingly starred in. And now for the first time in my lifetime, Terry Bollea is forefront in my mind instead of the character he so iconically embodied for close to four decades.

We’ve seen so many of our heroes fall from grace – especially during this, the golden age of “gotcha” journalism. From Cosby to Kramer, Michael Jackson to Mike Tyson, Lance Armstrong to Michael Vick… the list multiplies seemingly every day and for different offenses. But what do you do when it’s YOUR hero? What do you do when it’s the guy on the poster on your wall that lets you down? What do you do when the arms behind the curtain, pulling the strings to your own, personal superhero all these years turn out to be 24 inches in diameter – and not very super at all? Do you burn the whole pedestal to the ground? Do you walk away, join the angry mob and leave the wreckage behind or do you stick around to search the debris for something salvageable? Truth is, I have no idea what any of the answers are right now but these are all questions I’ve asked myself over the past few days in an effort to carve out some, small sliver of acceptability so that I can go back to idolizing my hero.

Was it an isolated incident during an admitted “rock-bottom” period in his life when he allegedly contemplated suicide? Or maybe he really, truly feels such a horrible, hateful way about black people? Or maybe it’s somewhere in the middle, clouded between circumstance and innate human prejudice? Either way, I feel stuck between my heart which is full of forgiveness and loyalty to someone who’s brought me nothing but sheer joy in my life… and my brain which can’t wrap itself around the painful truth of the matter. It just doesn’t compute to take a man who has devoted 100% of his public life to putting smiles on every color of face there is on the planet… and write him off until the end of time because of something devastatingly hurtful and stupid that he did in his personal life.

And that’s why I can’t stop thinking about Terry Bollea, the man. Because that’s who did this: The man, not the myth. And that’s who I ultimately have to find a way to forgive. Problem is, I don’t know anything about Terry Bollea. He’s not the guy I dressed up as for Halloween. He’s not the guy I impersonated in front of my fellow campers at Camp Ramah in the Poconos. He’s not the guy I fanatically paid tribute to on national TV. And he’s not the guy I’ve cheered for and idolized every day for the past 30 years . But is he the guy that transcript makes him out to be? Or is he at all, anything like the hero he portrayed? Behind the headbands and boas and tie-died tights, if Terry Bollea ever decides to step out from behind his make-believe red and yellow curtain, and reveal his true self, what kind of man will we find? All I can do is hope that it’s someone I can believe in again.

About Andrew Goldstein: Andrew is a former WWE creative writer who is now a morning TV producer and comedy writer.