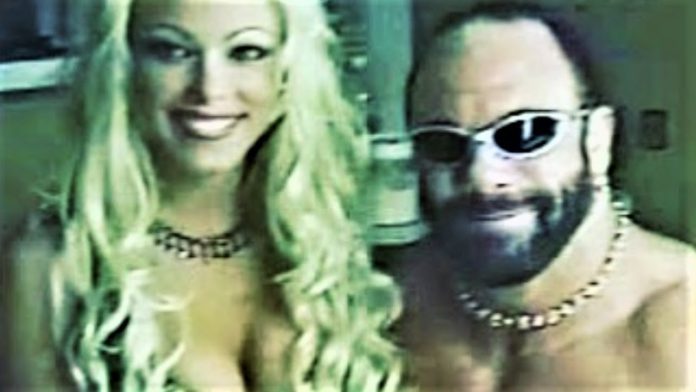 During an appearance on David Penzer’s podcast, former WCW star Gorgeous George/Stephanie Bellars commented on her relationship with Randy Savage:

“The first two years, he was amazing. He was the best boyfriend I ever had. I would marry him in a heartbeat. Then you know what, he got nuts. He said, ‘You know the gimmick is for me to have a girl with me? They (WCW) want to play off that and I want to because I’ve done it so long with Liz, that’s what I’m used to.’ When him and Eric were talking about him breaking out from Kevin Nash, the first thing they wanted to do was put him with somebody and Torrie Wilson was new on the scene. We went out to California and I met her. I hate talking about somebody, but I’m not a fan of hers for a couple reasons. I’m not a fan of hers because when I met her, she came off like a skank and that’s who they wanted to put Randy with. We went home and I said, ‘If you honestly think you’re going to be traveling 300 days a year with her then I’m not going to be your girlfriend anymore and I don’t want to have anything to do with you.’

He said, ‘Well, then I guess you’re going to have to step up your game. You’re going on TV with me.’ I said, ‘I don’t want any part of that.’ That was never in my plan of being with that dude. He said, ‘Well, they are going to put her with me. That is the plan.’…They threw me in the mix fast and that’s the only reason why I did it was because I didn’t want him traveling with her…He didn’t want me to wrestle at all for two reasons. He didn’t want me to learn because if something ever happened between me and him, I could go on my own. The other reason is he didn’t want me to be put in situations where I would have to be a wrestler. That’s why Nora and Madusa tried to train me as much as they could for the small time that we did stuff, but he would always say, ‘No.’

People would tell him ‘You don’t want her to be Sable and you be the Marc Mero.’…A lot of times people would want me at an autograph session and not Randy because they said he charges too much and they just wanted the girl. He would tell them that if it’s not both of us, they are not getting it. I was asked to do Playboy twice and he told them, ‘If I’m not on the cover too, then she’s not doing it.’ It got to the point where I thought he had my phone tapped and I had bugs in my clothes and my purse because he had a friend who owned a spy place and I thought everything we had was tapped.”