The wait is over! The critically acclaimed Pro Wrestling Documentary, Hard Knocks is now available on DVD, which includes over 80 minutes of unseen interviews, deleted scenes, and exclusive special features, featuring the stars of the WWE, TNA and the independent world. You can order the DVD right now, directly from the official Hard Knocks Facebook page, for only £9.99.

The film is also to be available via Amazon, and a number of Video On Demand services, as well as the world’s first EVER broadcast online film festival. More details to be announced over the coming weeks. 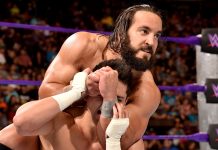