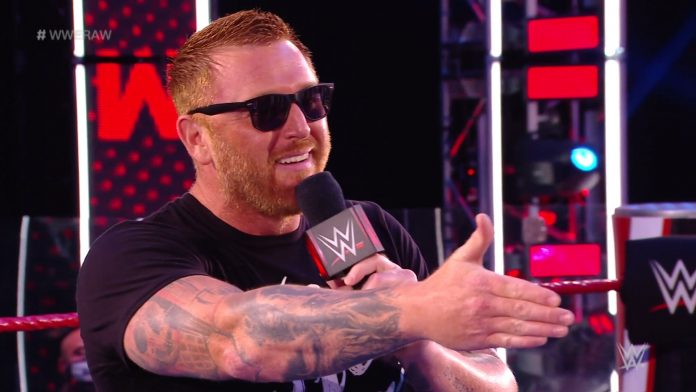 Heath Slater made his return to WWE TV during tonight’s RAW episode on the USA Network.

RAW opened with WWE Champion Drew McIntyre coming out to call out Dolph Ziggler, hoping Ziggler would reveal their stipulation for the match at WWE’s “The Horror Show at Extreme Rules” pay-per-view. Ziggler came out and said the stipulation will remain a secret until it’s time for the pay-per-view. Ziggler also talked about how McIntyre has a history of betraying people close to him and then forgetting about them. That’s when he introduced Slater, who came out with no music.

Slater and Ziggler entered the ring as Slater cut a promo on how McIntyre hasn’t been there for him, especially after he found himself unemployed. This led to a challenge laid down by Slater, and Drew accepted but hesitated. RAW then returned from a commercial and Drew immediately squashed Slater with a Claymore Kick, while both were wearing street clothes. Drew pinned Slater for the easy win. After the match, Ziggler yelled at Slater and they had words until Ziggler attacked him. Drew ran back down to the ring and made the save for Slater, forcing Ziggler to retreat. The segment ended with the former 3MB partners standing together in the middle of the ring embracing.

Slater was released from his WWE contract back on April 15 as a part of the company-wide cuts brought on by COVID-19. He is technically still under contract to WWE until his 90-day non-compete clause expires on July 15.

Below are photos and videos of tonight’s opening RAW segment from the WWE Performance Center in Orlando: