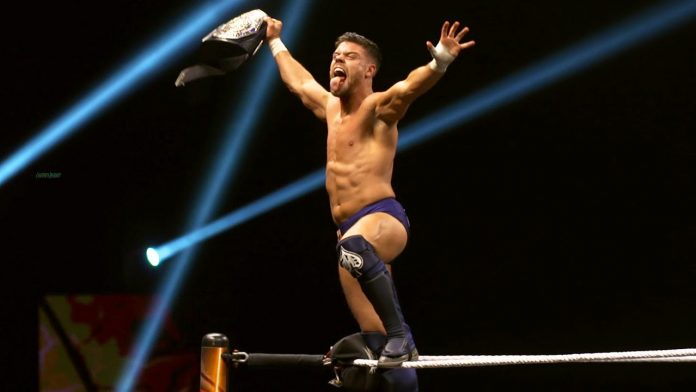 It looks like big things are to come for new WWE NXT Cruiserweight Champion Jordan Devlin.

The title win could see Devlin get WWE TV time on all brands, including RAW and SmackDown. The Wrestling Observer Newsletter reports that WWE Hall of Famer Shawn Michaels is a “huge proponent” of Devlin, and that the idea behind the title win is for him to defend across all brands. Michaels works closely with both NXT brands but as noted last week, he revealed during a new video why he is especially close to NXT UK.

Another NXT UK Superstar who may be in line for a big push in 2020 is Ilja Dragunov. Alex McCarthy of talkSPORT reported on Twitter that he spoke with a WWE official while in Texas for Royal Rumble weekend, and he was told that Triple H “is obsessed” with the 26 year old Russian, who signed with WWE in February 2019. Dragunov lost to Finn Balor in the Worlds Collide opener last weekend.

Regarding Devlin and Michaels, we noted back in January 2019 how The Heartbreak Kid praised The Irish Ace during a media interview.

“One guy who I didn’t know, or hadn’t seen was Jordan Devlin,” Michaels told The Daily Star during an international media call during January of last year. “He was good when he came in, but now he is really starting to feel it. [Jordan] is oozing confidence. And I hate to pinpoint one person, but I have seen him grow exponentially He is a real talented kid, and his ceiling is pretty darn high.”