Here are the highlights from the Cody Rhodes Q&A at Starrcast courtesy of @ConnorCasey_CB on Twitter:

* Cody’s mother said “too much blood!” after the win over brother Dustin Rhodes at Double Or Nothing back in May

* Tony responded, “Hell yeah we are!” when asked if he and Jim Ross will be calling matches together

* Cody said Dusty made a dream team of amateur wrestlers while Cody was in high school, and one of the wrestlers on the list was SmackDown Tag Team Champion Xavier Woods

* Cody felt like he was way too green and “kinda sucked” when he first debuted on WWE TV. “I can never not appreciate what they did for me,” he said of WWE

* Cody said he left WWE because he was getting tired of having to impress just one guy – Vince McMahon. Tony asked if the Rhodes family name hurt him while he was in WWE. Cody said Vince assumed he was just like Dusty and brother Dustin, and he’s not

* Cody promised All Out will be AEW’s best show so far. He said talent is what will make AEW stand out, and talked about how All Out will be produced, and added that pro wrestling can’t be PG

* AEW President and CEO Tony Khan told Dustin after their Double Or Nothing match, “You made my company in one match”

* Cody said “Standards and Practices” didn’t like all the blood in his matches or the chair shot from Shawn Spears at Fyter Fest. He said, “And I’m going to keep doing it!”

* Cody was asked about his Stardust gimmick in WWE. He talked about how Stephanie McMahon came up with the idea and Vince loved it. He said the mask made it look like he was wearing a condom on his head. Vince said he should shave his head instead

* A 10 year old fan asked if AEW will have 20 minute promos and Cody responded,”Not a chance in hell”

* Cody said “we should probably do the pay-per-view again here (in Chicago) next year” and added that they “might have” talked to the United Center already. He also said it’s very likely that an AEW TNT episode and pay-per-view takes place at the State Farm Arena in Atlanta in the future. He wants people to travel to Washington, DC to the Capital One Arena for the TNT premiere on October 2, as this was part of the reason why they chose that location for the first show

* Cody gave props to Orange Cassidy for being a great wrestler

* Cody credited Rey Mysterio with making his career and said AEW will steal Rey if WWE doesn’t treat him right. Earlier he credited ROH with helping to make All In a success, and with helping him develop his “American Nightmare” persona

(Thread) Back in the main hall for Tony Schiavone and Cody Rhodes. Updates coming #Starrcast 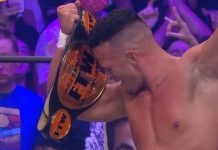 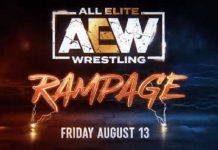