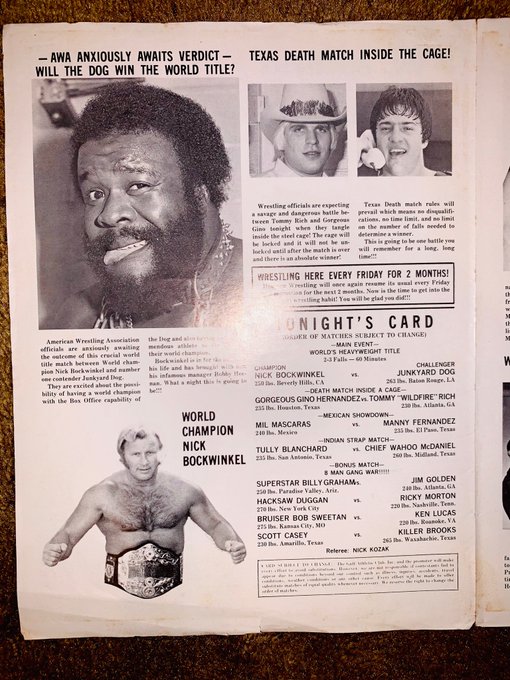 In the modern era, so much of the history of professional wrestling is preserved on film and available at the push of a button. The combination of wifi, smart phones, and streaming networks allow fans to shuffle through the digital pages of wrestling history almost instantly. It might be a WWWF Madison Square Garden show from the 1970s with those concrete rings, an NWA super card of the 80s where the blood flowed freely on the canvas, or the spectacles of the 90s when the business was at such a boom period.

However, as tough as it might be to consider for modern fans, there was a time before technology allowed everything to be saved and filed away in a digital archive so easily. For example, footage of Ray Stevens and Pat Patterson, regarded as one of the greatest tag teams of all time, is only seen in often incomplete 8mm footage that was shot from ringside. Still, there are those that attempt to compile the physical items that remain from that era. Jim Cornette, the legendary manager that can still rile up wrestling fans today, has a well-known collection of items that range from programs to beta tapes to posters to log books. Podcast czar and real estate guru, Conrad Thompson is known for his collection of historical items as well. Thankfully, collections like these ensure that names from the past don’t get lost in time. Jim Londos, Karl Gotch, Ed “Strangler” Lewis, and others remain a part of the fabric of wrestling history through these records.

Theses rare finds don’t pop up often and there are a small circle of people that have such items in their collection.

More recently, diehard fan Phil Cole got some notoriety on Twitter when he began posting photos of Houston Wrestling memorabilia. Some of the never-before-seen items were from the personal records of Paul Boesch, a former grappler that took over promoting the city in the mid-1960s and ran a successful territory for more than two decades before his retirement. Houston Wrestling had a who’s who of the biggest names throughout multiple eras of the industry, and these office records give unbelievable insight into the booking and payoffs of some of the sport’s biggest stars. Harley Race, Junkyard Dog, and Gino Hernandez were just some of the names that were sprinkled in the documents.

“When I purchased all these items from the Paul Boesch estate sale, I had no intention of ever just putting them in storage or never showing them. I believe every wrestling fan should be able to see these historical documents of wrestling,” said Phil Cole.

Cole, a diehard fan his entire life, was memorized with the sport since 1977, particularly with Mexican legend, Mil Mascaras. At just eight years old, he bought his first Bill Apter magazine and was hooked for the rest of his life. Hunting down programs and similar items from the era of his earliest fandom became a fun hobby, but when the Boesch estimate went up for sale, Phil took his fandom to an entirely new level.

“I knew the Paul Boesch estate sale was going to be in early March of last year. Obviously, I wasn’t able to fly to Texas for it. So, I had a good feeling that there would be some wrestling memorabilia from the sale. Little did I know, it would be Boesch’s personal collection of programs, signed contracts, and financial paperwork. I purchased my first complete program with all 12 signed contracts and all the paperwork around nine days after the estate sale on e bay. I actually contacted the seller the moment I saw it, she had just listed it. I made her an offer and she accepted. It was the October 24, 1980 card with the main event being Dusty Rhodes vs. Ivan Koloff in the first ever coffin match,” Phil explained.

Being a fan of Houston wrestling and a collector of memorabilia, Phil was very enthusiastic for his items to arrive at his home in Western Pennsylvania, but the impact of the documents he received had on him was profound.

“When I finally received my first one in the mail, It was like Christmas as a kid. I was very excited to actually hold these rare items in my hands. I wasn’t disappointed, I was actually holding Paul Boesch’s original paperwork that he filled out. It was sort of surreal, to be honest. These have never been seen by anyone until now, very historic wrestling material, Cole commented.

Seeing the payoffs, gates, and revenue all written from the hand of the legendary promoter hooked Phil completely and he was immediately on the hunt for as much of the Boesch estate as he could find.

“A second seller on e bay popped up, I contacted him as well. He actually bought the bulk of programs from 1979-1985. All were complete with signed contracts and paperwork. I sent him two dates from 1980 that I wanted to buy and I was very excited to find out he had both of them. We worked out a deal, and I just added two more to my first one. I stayed in contact with my seller and have purchased a few more Houston programs and contracts,” Cole remarked.

In the time since he began posting pictures of these collections, Phil’s memorabilia became a highlight of social media, as other longtime fans get to enjoy a glimpse at such rare items that weren’t uncovered until the Boesch estate sell.

“My favorite piece’s of the Paul Boesch collection would have to be my signed contracts from both NWA World Title Match’s between Harley Race and Mil Mascaras,” Phil concluded.