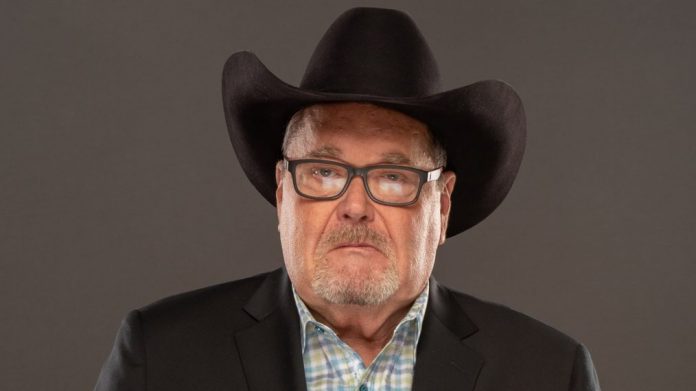 During his podcast, Jim Ross updated fans on how he’s doing since his return to AEW television from cancer treatment:

“Here’s the interesting part for me to try to heal was this just doesn’t heal quickly,” Ross said. “It’s in a part of your body that has no fat on your ankle…and it’s just got to take some time…I say it’s like a bad sunburn [but] it’s really at another level. It’s the best way to explain this radiation burns, that’s what it is because all the skin is gone now. So it’s all new skin. That means it’s more exposed to the nerves. So it’s a b*tch in that respect. But it is getting better and a lot of that old skin is gone and and new skin is starting to mature. So it’s just what it is, you know, and I kind of get used to it. Thank God for these creams that they gave me at the cancer clinic. So I use that three or four times a day to help heal the damn thing. But I’m going to make it fine.”

“I have had to tolerate a lot of pain and flying is the sh*ts. We all got to be careful. When I go get on a plane I’ll make sure I got plenty of [cream] on my burn and I have it wrapped and protected. But boy, it’s a pain in the ass to fly, I’ll tell you. You know what I’ve been doing? People are gonna probably laugh at me and someone seen me go through the airport. I’ve been ordering a wheelchair. Walking is a killer, it just kills it. So I’ve been getting the wheelchair at the airport on both ends. So they picked me up, my driver picks me up here at home and takes him to the airport where I meet the wheelchair guy who now I’ve become buddies with. They’re all fans. They all like my $10 and $20 tips. So I’m very popular when they see me coming. Because I think most of the old people that have wheelchairs are tipping them like in ones or something into that denomination. So that’s taken a load off of me. So when I get off the plane, and we’re going like, this week, as we tape this, it’ll be Washington DC, which has very, very strict COVID rules and regulations. So that’s helped me a lot I feel. When I first did it (using a wheelchair), I guess my ego was getting involved. I didn’t want people staring at me because I’m sailing though the airport in the wheelchair in that f**king black hat.”

“So it’s nice if people pay attention. This ankle thing is not a work. I’m really am in this bad way. But I’m on my way to work at eight o’clock tonight. As we were speaking on Wednesday. I’m ready to kick ass. That’s great medicine for me, quite frankly. It may sound corny, but it’s a great medicine for me to because once I get there, and we start going over the show and getting ready to go on the air, it takes my mind off how much I’m hurting. I have medication and sometimes I get a shot. I got to do what it takes me to get on the air. I feel some obligation to the folks who watch the show. They don’t want me to half ass it [and come across like it’s] something I’m not ready to do or I don’t care about or I’m distracted.”