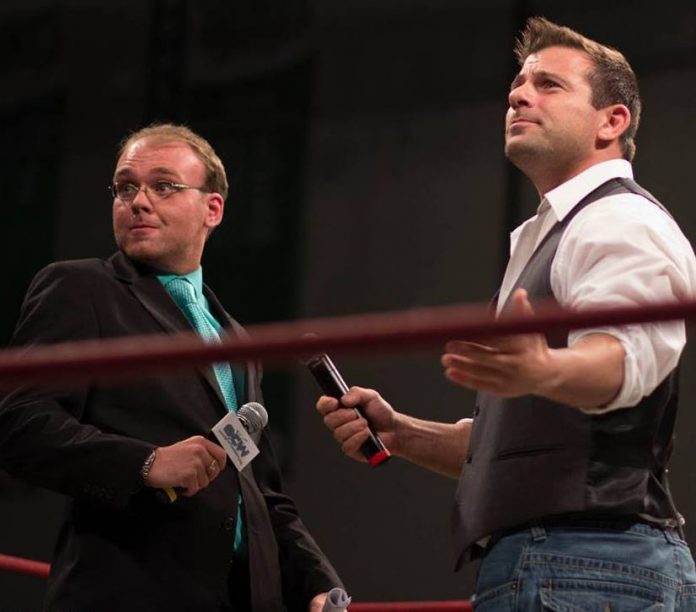 Dedication-the quality of being dedicated or committed to a task or purpose.

The term dedication echoes throughout professional wrestling history, particularly the sound bytes that provide the lyrics to the emotional melodies that are played on the canvas of the squared circle. The legendary Jim Ross exclaimed about the dedication of a newly crowned world champion as a broadcast went off the air to put a point on the segment.

That’s the pageantry and the spectacle at the top of the food chain of sports entertainment, and ironically, it takes much dedication under much less glamour circumstances to make it to the national stage.

Joe Dombrowski, a play-by-play announcer based in the Pittsburgh area, a region known almost as much for its wrestling as the steel it once produced, is an example of true dedication to the wrestling business. Dombrowski, who got his first taste of the industry when he helped facilitate a pro wrestling fundrasier at his high school, has spent his entire adult life involved in the genre. As special and thrilling as professional wrestling can be, the seedy side of the often carny business can be equally as frustrating. Joe has seen and lived victory and failure as he quite literally grew up at ringside, calling the action with a level of professionalism and passion that few have on the independent level. Getting his start at just 17 with the International Wrestling Cartel, the most decorated Pittsburgh group, Joe’s journey into the grappling arts took him across state lines and even across international boarders. Nearly every weekend for the past 18 years, Joe would zigzag to different states, putting in as much time and as much effort as possible in hopes of landing a big break.

A self-described night owl, Joe prefers to work late into the night, getting in his groove when many of the “average Joes” are sleeping off the stress of the typical nine-to-five shift. However, Dombrowski finds himself with pen in hand to jot down the notes for his next round of projects. Throughout the past two decades, Joe’s nearly obsessive nature to learn and consume as much as he could about sports entertainment found him with a base of knowledge that he could utilize in a variety of roles. Studying great minds like Kevin Sullivan, Eddie Graham, and Les Thatcher brought him the opportunity to work as a booker for a handful of different wrestling groups over the years. Writing storylines, structuring an event, timing matches, and building to major showdowns became a part of his tool kit.

In fact, there aren’t many hats that Dombrowski hasn’t worn throughout his time as one of the most prominent figures on the independent scene. Writer, commentator, ring announcer, video producer, and merchandise mogul are only a few of his titles. His name became so well-known that he had chances to peek his head into the top-tier groups occasionally, working as a lead announcer for Ring Of Honor in 2010 before the Sinclair purchase led to a shuffle of the announce team and then he returned to ROH in recent years as the featured commentator for the Future Of Honor division. In 2019, the squared circle took him all the way to Mexico to call AAA’s Triplemania event on their English broadcast team. Canada, England, and various VFW halls in rural America all document the path for him.

No show was too big or too small for Dombrowski, as every event was a chance for him to apply his craft, and that hustle is what truly makes the difference. But after such unanimous praise for his work on the mic for so long, would fate bring him a break?

“You always have to set goals for yourself, short and long-term, and keep grinding and keep focused on checking those off the list. I can’t lie and say I don’t ever get discouraged, it happens to everyone. Sometimes you need a day or a week to just rest or just get away from the break neck pace, especially after 18 years. I always told myself it’s great to have a major company invest time in you, but I don’t need it,” Joe explained.

He decided long ago that he was all-in with professional wrestling, as the sport allowed him to find his voice and to grow as a person, as well as a performer. He kept his weekends packed with an alphabet soup of indy shows, and during the week, late-night production sessions had him editing, writing, or researching one of his acclaimed video projects. Titles like The Montreal Theory, HWA chronicles, and a slew of Best of compilations brought truly unique content to the often-saturated wrestling media landscape.

“You need every tool at your disposal to make a big project come together. Every place I’ve been, every veteran I’ve worked with, every new situation I’ve been in, and every lesson I’ve learned has given me more tools to be ready for whatever comes next. there’s always something to accomplish and I always try to live by the philosophy that you can do something every day, no matter how small, to help accomplish your next goal,” he commented.

At a time when competition has shifted the dynamic of the wrestling business more in the modern era than anytime in the previous several years, the free agent market allows for more opportunity for both promotions and talent. Major League Wrestling, an organization led by Court Bauer, who has his own lengthy resume in the industry, has branded itself as a standout group in the currently crowded wrestling landscape. When MLW landed its national television deal on Bein Sports, management knew they needed an announce team that was “TV ready,” and that led to the addition of Joe Dombrowski to the organization, with his first national contract after 18 years of dedication to the sport.

“It felt great to be able to finally sign a contract after 18 years because it showed a promotion was willing to invest and commit to me on a large scale. I’ve had a number of incredible opportunities in the past to work for multiple top companies, but I never really felt like I had that sustained run where I could get comfortable, spread my wings and really show what I can do. I know Court had mentioned hearing me on AAA TripleMania a couple years back, so I’m sure that didn’t hurt, but really it just felt like right place, right time, right opportunity for us both so it really fit,” Dombrowksi said.

So, Joe took his place where he’s most comfortable and at home, in front of a mic at a professional wrestling event, only this time, it will be broadcast on national TV with MLW.

Still, Joe remains as focused as ever because, thankfully, his MLW contract allows him to work on other events and projects, and not resting on his accomplishments, Dombrowski has a full calendar of work with broadcasting and upcoming videos release.

“I’m very fortunate to have something on the schedule every weekend again, which even six months ago seemed like a pipe dream at best,” he remarked.

Dedication, the same trait that motivated Joe Dombrowski to organize that first fundraiser at his high school is the same aspect that took him through the past 18 years to a contract to broadcast on national TV. Dedication is the same reason that Joe will continue his lifelong journey in the professional wrestling industry.

For more information on all of his past and upcoming projects, you can go to www.Joe-Dombrowski.com or visit his digital archives with hundreds of hours of content at www.http://ProWrestlingLibrary.com