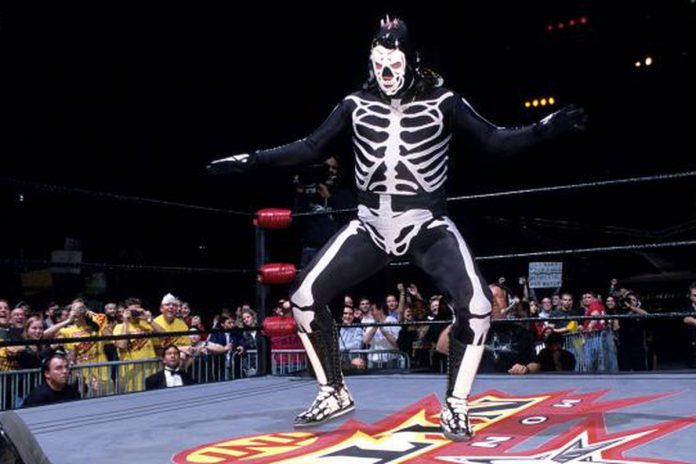 Lucha Libre, the Mexican form of professional wrestling, has been a staple of the country for over eighty years with names like El Santo, Blue Panther, Mascaras, Guerrero, Mysterio, and many others decorating its extensive history. In many respects, lucha libre and its energetic atmosphere represent so much of the pride of the Mexican culture. The colorful masks and costumes hold an important value to the fans and the luchadors themselves. Arena Mexico, centered in Mexico City is a venue primarily used by the CMLL promotion and is considered one of the most famous professional wrestling buildings in the world, hosting weekly cards.

While El Santo, the athlete that transcended the ring onto the big screen as a film star, wore a silver mask as a stoic hero, the designs of each mask varied based on the persona of each luchador. One of the most famous masks in the history of lucha libre is known around the globe as the Skeleton mask of La Parka, a charismatic grappler that thrilled audiences for over three decades. Similar to many in the sport, the real-life Adolfo Tapia is from a wrestling family with several relatives, including a brother, nephews, and son working in the ring as well. These family connections are what brought him to the ring during his youth.

“My family owned an arena that was called sports 47, and my guys were fighters,” La Parka commented.

After he learned the ropes, completing the tedious and grueling process of training to turn pro in the Mexican ranks, Tapia started his career in the early 1980s, working preliminary bouts for a variety of smaller promotions. While his family’s stardom in lucha gave him an introduction to the industry, it was not an easy road for him, as he polished his skills throughout his early years before he found himself as Mexico’s famous skeleton.

In 1992, when the late Antonio Pena founded the AAA organization, he scouted the premiere young talent in the country at the time, and in the process set the stage for those athletes to eventually make their way to America to introduce the Mexican style to the United States. Rey Mysterio Jr., Konnan, Psychosis, and Guerrera found their way to World Championship Wrestling television because of the connection to Pena’s AAA group. For Tapia, it was under the AAA banner that he became known as La Parka, a character that saw a full body suit with bones printed on it to match the human body to go along with the famous mask. The stellar in-ring skills that Tapia perfected on his way up the ladder of the business were now matched with a character that allowed him to take his career to the next level, flourishing to become one of the most popular competitors in his country.

Tapia made his WCW debut in 1996 based on the previously mentioned AAA connection that had actually began a few years prior when the Ted Turner company was the American pay-per-view distributor of the famous “When Worlds Collide” event. When Nitro launched in 1995 ahead of the wrestling boom of the late 90s, it’s well-documented that Eric Bischoff brought in the luchadors as a way to differentiate the product from the competition. Among the many Mexican stars that worked on Nitro at a time when the show garnered record-setting ratings was Tapia himself, who immediately stood out because of the La Parka costume and his ability to wrestle the fast-paced style that the luchadors were known for in WCW.

Through his three and a half years under contract to WCW, La Parka’s charisma transcended any language barrier, as he often entertaining the crowd with a combination on in-ring skills and antics. After a successful series of maneuvers, he would often strut around the squared circle to celebrate. Plus, he was dubbed “The Chairman of WCW” as a play on words after he was known for bringing a chair to the ring to smash opponents with when the referee wasn’t observing the action.

However, it was actually a match outside of WCW during his time under contract to the American company that Tapia considers a highlight of his extensive career, “When I unmasked Pierroth,” he explained.

In 1998, Parka challenged Pierroth, the grappler known around the world for his black and yellow mask, to a mask vs. mask match, one of the most important bouts in the lucha libre culture. La Parka won the match, and Pierroth revealed his face to the audience. Once in-ring rivals, Parka and Pierroth remain respectful friends today.

Before he left WCW in 2000, Tapia didn’t appreciate the disrespectful way the Mexican athletes were treated, but enjoyed the financial aspect of the contract saying, “WCW gave me the chance to earn so much more money than as just a wrestler in Mexico.”

Post-WCW, the skeleton-clad Tapia worked literally around the globe, wrestling for both AAA and CMLL in Mexico, tours of Japan, and even the American independent scene on occasion. A copyright dispute in the mid-2000s saw him make occasional variations to his name, such as L.A. Park, but fans in multiple countries still cheered for the famous wrestler.

Ironically, after more than thirty years as a performer, La Parka is still one of the hardest-working talents in the business, alternating between AAA and CMLL stints when he’s not wrestling on the independent circuit in both Mexico and the United States. One aspect of his career went full circle in recent years when he returned to American TV for the Major League Wrestling group, where he traded the aerial style he was known for in the 90s for a wild brawling style in the modern era that received rave reviews from American fans in attendance.

He spoke enthusiastically on his MLW experience saying, “American companies, in particular MLW does not have the disrespect that WCW had, they love the Mexican MLW”

After more than three decades in the ring, La Parka proved that the right combination of skills, persona, and charisma can translate to any audience. He often did things his own way in his career on the path to become a legend in the sport. It’s amazing that Tapia still works a nearly full-time schedule, but he can continue to thrill fans around the world. Still, the man known for the sinister skeleton mask is very appreciative for the opportunities that wrestling provided for him.

“I have won in MLW, to have fought in WCW, to be recognized in Japan, and to be the best Mexican wrestler are highlights for me,” he said.

More than anything La Parka is an example of how both performers and fans from any country or any background can enjoy the sport of professional wrestling. In many ways, through its different styles and interpretations, professional wrestling is an international language that can be appreciated around the world.