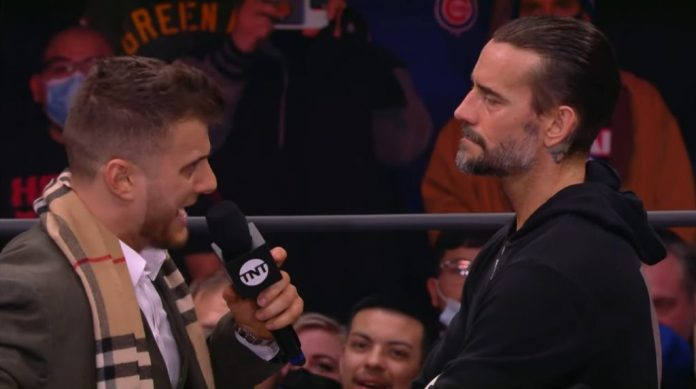 During a recent edition of Busted Open Radio, Mark Henry talked about CM Punk and MJF’s promo battle from the November 24th 2021 edition of AEW Dynamite:

“There will never be another promo like that one,” Henry said. “That was a special moment that we’ll never see again. Our kids may see one, but that was one of the most special wrestling moments in history. I say that because as a kid, I’ve seen some great promo artists, Roddy Piper, Ted DiBiase, The Rock, and you can go into hundreds of guys that we thought were pretty good on the stick, but never has there been two guys at the same damn time have a battle of wits that will equal, that touched on things that were so real, that we will likely not have those type of moments again.”

“I was so unbelievably amazed. I started off at the monitor. I’m sitting at the monitor. There’s 30 wrestlers sitting around that area, and everybody is popping. If you’re popping wrestlers, you’ve done something in your life. You won. I had to get up, walk out to the crowd to feel it because that’s why people go to wrestling. People go to wrestling because of how you feel, not because you just want to be entertained. There is true life, emotional investment. You want to feel it. That’s one of the reasons why AEW is so popular right now is because the crowd feels like they have a role in what they’re seeing, and they do. They absolutely do. I got to go out there. It felt like electricity moving my clothes one zinger to another one, one zinger back and forth. The city of Chicago, everybody that was there, will get to tell people for the rest of their lives, ‘I was at that show where CM Punk and MJF went toe to toe, a battle of wits, over 20 minutes, and not one punch connected.’ It was arguably the best verbal jousting that I’ve ever seen. I’ve watched segments of Wild ‘N Out. I’ve watched all of the Rap Battles back and forth. 8 Mile didn’t have anything on that on Wednesday. You can’t tell me that you’ve ever seen two human beings go back and forth like we saw. I can’t think of anything that is remotely close, even as good of matches that we’ve seen on AEW, as good of matches that we’ve seen on WWE programming, all of the elite wrestling that we’ve seen across the board in Impact, I’ve not seen a match that’s entertained me as much as that.”