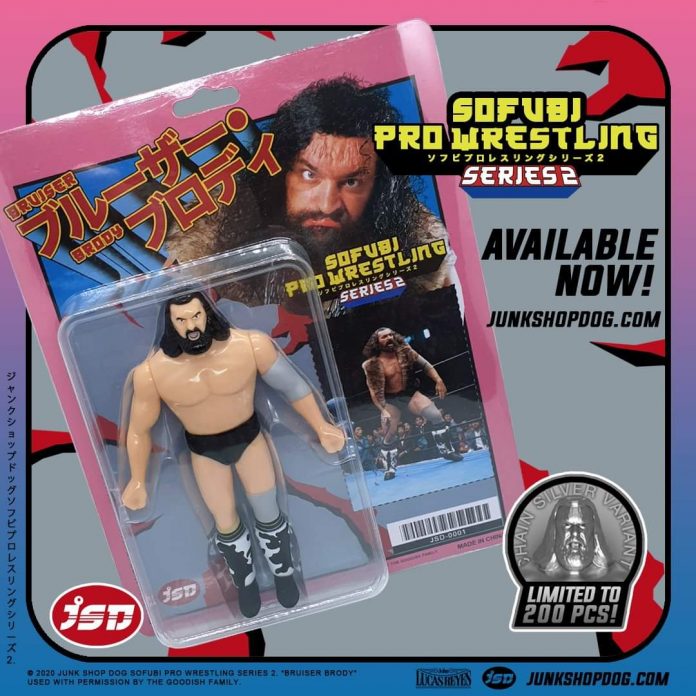 Among wrestling fandom, there was an influx of new merchandise added to shelves for fans when sports entertainment baron, Vince McMahon took his north east company national in the mid-80s. The popularity from the “Rock N’ Wrestling” connection and its association with MTV made the squared circle a part of the pop culture landscape. “Rowdy” Roddy Piper generated jeers as Madison Square Garden’s top villain, Andre The Giant personified the term legend with his mythical presence, and the remaining cast of characters left an impression that is still remembered today.

With his wrestling league in the main stream conversation, McMahon, being the true businessman he is, merchandised the product as much as he possibly could, slapping the WWF logo on lunch boxes, pencils, ice cream bars, and party hats. Aside from creating more brand awareness, this new venture allowed for an important revenue stream that would ultimately help give him the edge against the competition of the era. Most organizations sold $1 programs of a particular card and perhaps a few photos in the arena. McMahon took his line-up to retail stores and changed the perception of the industry.

Despite the slew of products that expanded considerably when the business was in an upswing, (remember WWF beanie babies in the late-90s?) perhaps the most enduring product made popular by the boom of the 80s in America was the action figures, a chance for collectors to hunt down replicas of their favorite stars or to re-create the action of the larger-than-life stars that beamed through their television screens. The figure genre has a league all its own in terms of its history, with different production companies manufacturing different styles of figures for different wrestling leagues over the years. The LJN line, known as some of the earliest figures released remain a part of the conversation because regardless of their lack of mobility, highlight such an iconic time for the industry.

Many assume because of LJN’s reputation for being the earliest line to hit retail stores that they might be the oldest series to be released. However, the ultra-rare “Popy” series landed in Japan in 1981, a time when professional wrestling often aired in prime time and was wildly popular. The set, including names like Terry Funk, Abdullah The Butcher, Stan Hansen, and others, is considered the rarest series in existence, with online listings of at least a few hundred dollars for just one figure within the line-up. The bright box art and simplistic design gives the set a classic look that maintains its value today.

One of the focuses of the original Popy production was the “gaijin” or foreign wrestlers in Japan, and included many of those that made their legacy within the sports entertainment world in Japan. However, there was one exception, Bruiser Brody, who reached iconic status in the country as one of its most popular performers. The wild caveman was amazingly agile and was as believable as anyone when his trademark furry boots stepped onto the canvas. As mentioned, the Popy line had Abdullah the Butcher, one of Brody’s longest rivals, and Stan Hansen, his tag team partner for a very memorable run. But, Bruiser Brody, who was only released in action figure form officially under the Jakks Classic Superstar line several years ago, didn’t have many other figures.

A diehard fan from Sydney, Australia of all places, wanted to fix this glaring omission and set out to do just that. Adam and his wife, Portia launched “Junk Shop Dog” an online store dedicated to the sale of hard-to-find figures. Becoming a fan during the previously mentioned boom of the late-90s, Adam became obsessed with research of the history of the sport and stumbled upon the existence of the variety of action figures that were made previously.

“I started watching wrestling in the late-90s, Mankind’s chase for the belt in late 1998 captured my attention, and I was a fan from then on. A desire to delve into the back catalogue is what turned me to the figures. All of the Coliseum Videos of the mid-90s were readily available at the local video shop and of course, they had the ads for the Hasbros. Fast forward and I started to collect this awesome line,” Adam explained.

The Australian consumed as much professional wrestling as he could for nearly a decade before a trip to Japan to see the sport live proved to be a life-changing experience for him.

We're blown away about the kind words of @evanhusney & @jasoneisener of @DarkSideOfRing – hoping the next releases make it to more "top of 2021" lists! https://t.co/WgRrmSWPWl


“I bought an articulated Jushin Liger at the NJPW shop. It sat on display, but my collecting started a few years later when trying to get the Hasbros. We searched high and wide for them; and happened upon some in Japan, and some Chara Pros. We had no idea how vast and inclusive the line would prove to be. Further research, buying, selling, and the finding out more about the many lines released in Japan, our collection now covers a lot of those lines,” he explained.


Hours of research led to the discover of the Popy line-up mentioned prior, and after he added the rare series to his collection, Adam noticed that the production of those figures ended abruptly with no series two ever issued in Japan. He also saw that the two other Japanese Brody figures made by CharaPto and Medicom were simply too expensive for most fans to afford. Through his online sales of various figures, Adam saw a trend for those that wanted a Japanese style Bruiser Brody figure.

Ironically, Bruiser Brody’s wife, Barbra Goodish, a wonderful lady that has done a remarkable job to represent his legacy is from the same hometown of Adam’s wife in Dunedin, New Zealand. They had talked to Mrs. Goodish in the past and stayed in touch with her so when the idea for a newly-produced Brody figure was developed, they reached out to her to discuss the product. Sadly, those discussions revealed that Mrs. Goodish hadn’t received any royalties from the sale of the Chara Pro or Medicom figures that were released several years ago.

“We could right a wrong in that respect,” Adam said enthusiastically.

With the fully endorsement of the Goodish family, Adam and Portia set out to design a “Series 2” Popy Brody action figure, but the new territory was a completely new experience for them as Junk Shop Dog was founded on selling and shipping figures. The design process was an entirely new project.

“In terms of the actual manufacturing, it’s an interesting, but eye-opening process. It starts with reference drawings and images with prototypes, molding, and the final product. It can test the patience when you are only working on one at a time,” he explained.

Even with a production company handling the direct manufacturing of the product, the processing of all the orders go through Adam and Portia directly. It’s not uncommon for Adam to bring shipping boxes into the living room while Portia prints labels in the kitchen.

“Thankfully our figures are pre-packaged, but the rest of it is very much representative of JSD as a whole, it’s Portia and I the whole way. The printing of labels, stamping logos on boxes, and packing orders are all done by the two of us,” Adam said.

The official launch of the Brusier Brody Popy-inspired figure last month was well-received, both for the traditional version and the silver variant at an affordable price. Junk Shop Dog looks to continue the production of the Bruiser Brody series two figure and explore the addition of future releases while they continue to sell vintage figures.

To order the Bruiser Brody figure, you can go to www.Junkshopdog.com