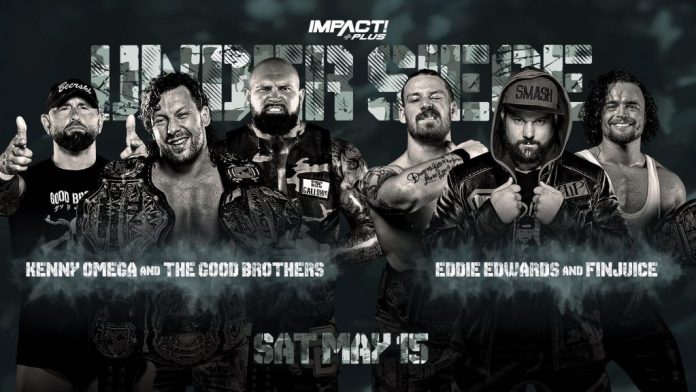 Under Siege will also feature a Six-Way #1 Contender’s match to determine the next wrestler to challenge for Omega’s titles. The winner will earn a future title match with Omega. To enter the Six-Way at Under Siege, there will be six qualifying matches. This week’s show saw Chris Bey defeat Jake Something to earn his spot, while Matt Cardona defeated Brian Myers to earn his spot. Sami Callihan vs. Eddie Edwards took place for the third spot but the match ended with Omega and The Good Brothers interrupting, which set up the six-man main event for Under Siege. It was later announced that Sami won by DQ to advance. Next week’s Impact will feature three more qualifying matches for the Six-Way at Under Siege – Rhino vs. Chris Sabin, Moose vs. James Storm and Rohit Raju vs. Trey Miguel.

Impact has also announced that W. Morrissey will be in action at Under Siege. He will face Willie Mack. The former Big Cass debuted at Rebellion last Sunday and then last night on Impact he defeated Sam Beale.

It was also announced that Kiera Hogan and Tasha Steelz will get their rematch from Knockouts Tag Team Champions Jordynne Grace and Rachael Ellering at Under Siege. Grace and Ellering won the titles at Rebellion this past Sunday.

Impact Under Siege will take place on Saturday, May 15 from Nashville, TN. It will air exclusively on Impact Plus. Below is the current card: