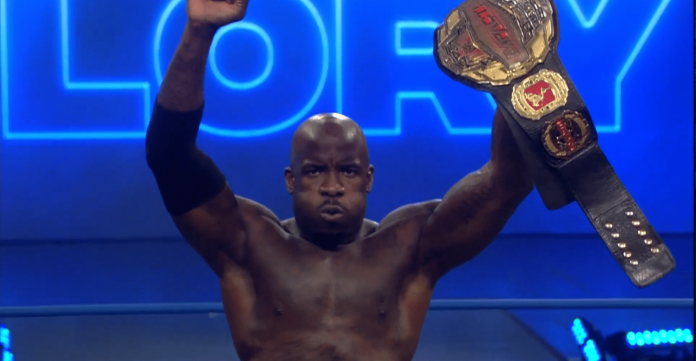 By capturing the IMPACT Wrestling World Championship on October 23rd, Moose solidified himself as the best former NFL player of the modern era to have gone on to be a World Champion in professional wrestling.

Quinn Ojinnaka, the real-life Moose, played for four teams over seven seasons in the National Football League, including the New England Patriots, where he was teammates with NFL legend Tom Brady while playing for one of the best NFL head coaches in history, Bill Belichick. An offensive tackle/guard, Ojinnaka played in 62 NFL games, with 20 starts, after playing at Syracuse University. He was selected in the fifth-round of the 2006 NFL Draft by the Atlanta Falcons.

The only other former NFL player from the modern era to have transitioned into pro wrestling and became a World Champion is Bill Goldberg, whose three-year NFL career included appearances in 14 games (1 start).

There are only four others who have ever gone from the NFL to World Championship glory:

Bronko Nagurski
Played his NFL career for the Chicago Bears from 1930-37, and 1943. Was a 3-time NFL Champion and 4-time All-Pro, landing in the Pro Football Hall of Fame as a charter member, inducted in 1963. He was a multi-time World Heavyweight Champion.

Ernie Ladd
Played his pro football career in the AFL from 1961-68, including an AFL Champion season for the San Diego Chargers in 1963. The AFL operated for 10 seasons, from 1960 until 1970, before it merged with the older National Football League (NFL) and became the American Football Conference. A defensive tackle, Ladd was inducted into the San Diego Chargers Hall of Fame and the WWE Hall of Fame.

Dick The Bruiser
Played for the Green Bay Packers from 1951-54 as a lineman, appearing in all 48 regular-season games that the Packers played in those years. Drafted by Green Bay from his alma mater, Purdue University. He was a multi-time World Champion, including a run with the prestigious AWA World Heavyweight Championship.

Gus Sonnenberg
Played in the NFL from 1923-1930 for such teams as the Buffalo All-Americans, Columbus Tigers, Detroit Panthers, and Providence Steam Roller. He was a member of the 1928 NFL championship team. He was the as National Wrestling Association World Heavyweight Champion.

IMPACT Wrestling Executive Vice-President Scott D’Amore said: “There are so many former NFL players who had notable pro wrestling careers, including Brian Pillman, Steve McMichael, Monte Brown, Leo Nomellini, Wahoo McDaniel and Russ Francis, among others – but none of them became World Champion.

“Moose is among an exclusive list of only six former NFL players, including a member of the Pro Football Hall of Fame, to have become a pro wrestling World Champion.”

D’Amore helped train Moose during his transition from the NFL to wrestling. He added: “The term ‘generational talent’ is overused, but it is very apt for Moose. He would have been a formidable presence in wrestling just by being a 6-foot-5, 300-pound athlete, but the way he moves inside the ring, his freakish agility for a big man … he’s the next level of super-athlete.”

Sports Illustrated on November 17th spotlighted Moose and his record-setting journey from the NFL to IMPACT World Champion: https://tinyurl.com/r8hdutuy.

Moose defends the IMPACT World Championship against Eddie Edwards this Saturday night, November 20th at Turning Point, airing LIVE on the IMPACT Plus app and for Ultimate Insider Members on IMPACT’s YouTube Channel. Turning Point will originate from Sam’s Town Live! in Las Vegas and tickets are still available: https://bit.ly/IMPACTVegas.