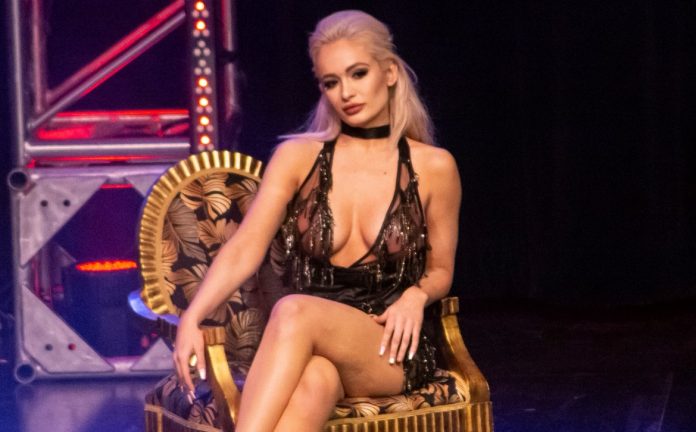 Scarlett Bordeaux has been granted her release from IMPACT Wrestling.

IMPACT issued a statement this morning announcing that Bordeaux has been released:

IMPACT Wrestling confirms that it has released Scarlett Bordeaux from her commitments to IMPACT. We wish her every success in her future endeavours.

PWInsider first reported that Bordeaux requested to be released from IMPACT last month. It was noted that her contract was not guaranteed as she only got paid per appearance.

Bordeaux joined IMPACT about a year ago after working a match taped for Xplosion. In July, vignettes began airing on IMPACT! hyping a “Mysterious New Knockout,” which turned out to be Bordeaux.

Bordeaux debuted on the July 26, 2018, episode of IMPACT! in an interview segment with Alicia Atout. Calling herself “The Smoke Show,” Bordeaux vowed to make IMPACT sexy again and said that she won’t be “hot shamed.”

After a long talent search, Bordeaux announced the winner as herself and that she’d soon be competing inside of an IMPACT ring. She made her in-ring debut on the March 29, 2019, episode of IMPACT!, defeating Glenn Gilbertti in an intergender match.

Bordeaux started teaming with Fallah Bahh in April, turning face in the process. With Bahh by her side, Bordeaux had her first pay-per-view match at Rebellion, where she was victorious over Rohit Raju. She then began hosting a talk show called “The Smoke Show.” The latest episode aired last week with Knockouts Champion Taya Valkyrie as her guest.