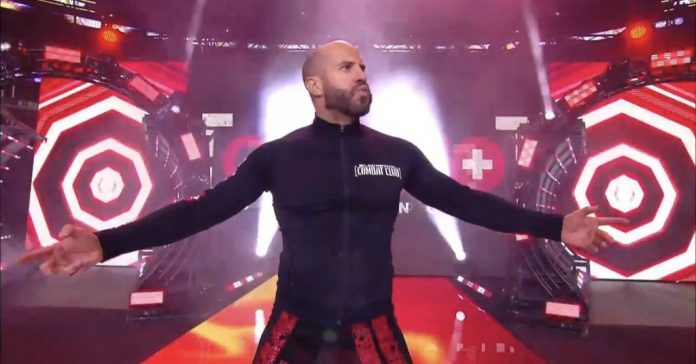 As everyone already knows, Claudio Castagnoli, AKA WWE’s Cesaro, is now on the AEW roster. This was a brilliant move for him. He has only been in AEW a short time but has already made a huge impact! Based on his performance this far, I’d say that his future looks bright with the new company.

Claudio was with the WWE for 11 years and with several other organizations prior to finally signing with them. During his time with the WWE, he was very successful and popular with the fans. Claudio was a 7 time Tag Team Champion and a United States Champion. He also won the inaugural Andre the Giant Memorial Trophy at WrestleMania 30.

As a tag team wrestler, he had the most success when he teamed with Sheamus to form the tag team, “The Bar.” Together they were 5 time WWE Raw Tag Champions. Not bad! He also held the Smackdown Tag Team titles twice.

Claudio had a great run as the United States Champion. He defended the title multiple times and held the belt for an impressive 239 days. Until he eventually lost the belt to Kofi Kingston on an episode of Monday Night Raw.

Wrestling fans know that Claudio is a talented performer. He’s athletic and charismatic, and he’s super strong!
The Wrestling Observer named him the most underrated wrestler in the world for 4 consecutive years! (Which is a record by the way.)

So why did the WWE not build him up more or see him as someone who could carry the WWE Universal Championship or WWE Championship? Great question! Sometimes it’s timing, and sometimes you just fit better elsewhere or under a different management team.

At AEW’s Forbidden Door PPV and the Blood and Guts show, Claudio was well received by the fans and showed that he was already a top talent at AEW. I’m sure that Tony Khan saw the unlimited options that were available with Claudio and was happy to sign him to a deal.

So what now? Does he have a singles run? Does he go into the tag team division? Do you start a feud with Eddie Kingston? There are a lot of different opportunities and angles available with this guy.

So is Claudio ready to be a champion again? Absolutely! I think that great things are in store for both the AEW fan base and Mr. Castagnoli.