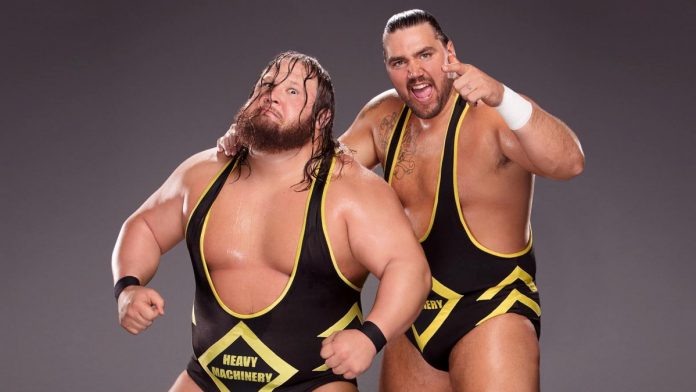 After the McMahon family shook things up on Raw last week with a game-changing announcement, the pieces started to fall into place when it was confirmed that six NXT standouts would be arriving to the Raw and SmackDown LIVE brands.

We have learned that WWE plans on having Heavy Machinery join Raw. They’ll have much a greater opportunity to succeed on the red brand compared to SmackDown LIVE, where SAnitY, The Colons, Luke Gallows, and Karl Anderson struggle to find consistent TV time.

Dozovic and Knight have the odds stacked against them since they weren’t among the top tandems in NXT. There’s a feeling that their success on the main roster hinges on whether Vince McMahon finds Dozovic funny or not.

“Their success or failure depends on one thing; whether Vince finds Dozovic funny or not. He’s not a fan of the short blocky guys, but Dozovic is legitimately super strong and is legit,” Meltzer wrote last week in the Wrestling Observer Newsletter.

“Tucker Knight has size, and he’s fine, but on the main roster he’s going to be just a guy. One person close to the situation said that he sees it as either Vince loving or hating Dozovic. If he loves him, they’ll be okay, but eventually, Vince will break them up and Knight will be headed nowhere. If he doesn’t like Dozovic, they’ll be another Ascension or Sanity.”

Although Heavy Machinery’s promotion to the main roster was a surprise to most fans, it wasn’t among their peers. Within NXT, “it wasn’t much of a secret that Heavy Machinery was going to be brought up,” according to Fightful.com.