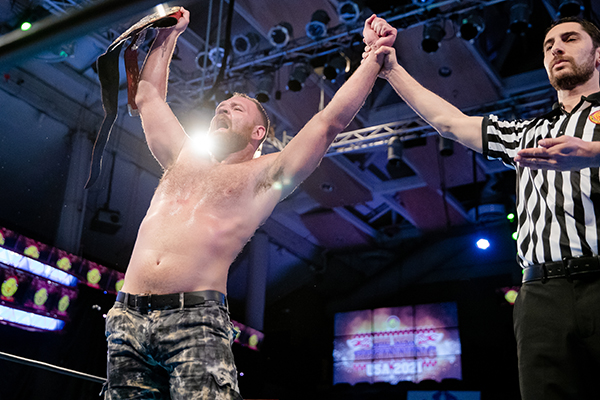 It was revealed this week that Jon Moxley, the former Dean Ambrose, won the Wrestling Observer Newsletter’s Wrestler of the Year award, an accomplishment named after both Ric Flair and Lou Thez, a nod to the past, which is fitting since Dave Meltzer, the primary editor for the newsletter for over thirty years, is regarded as one of the most knowledgeable sources for the history of the sport.

As is the case with anything in the age of social media, fans are divided on this announcement, as All Elite Wrestling, the promotion co-founded by many of Meltzer’s friends in the business, took home a major portion of the awards. On the flip side, to discount AEW’s accomplishments during the pandemic, which was an incredibly difficult year for everyone, would be misguided as well. As much as some might claim the awards that the Khan-owned organization racked up are a textbook example of nepotism, would the concept of nepotism be anything new in the wrestling business? How else did Ed Leslie keep a job for years? Nothing against Brutus, but he had more gimmicks in his career than stars that Meltzer gave for a Tokyo Dome main event. Yes, that statement was said in jest, but it’s also accurate.

Regardless of the riff raft of social media, was Jon Moxley actually the wrestler of the year in 2020?

Similar to almost everything in 2020, the lens of the pandemic must be used to examine the issue because it definitely impacted many of the ways that Moxley and any of the other contenders for the awards performed in unprecedented circumstances. Granted, the entire criteria for what makes someone worthy of the award is subjective, but let’s try to narrow it down to the more probable choices.

Jon Moxley won the championship just weeks before the pandemic melted the entire world and dropped it in December so he was the AEW world champion for the vast majority of the year. As much as 2020 was Moxley’s year as a main eventer in AEW, the same could be said for Drew McIntyre in WWE because while he didn’t start the year as champion, the build from as early as the Royal Rumble was designed to push him as one of the top guys in the organization. Some have cited Kota Ibushi, who had an incredible run the past few years in New Japan before he finally captured the IWGP belt at the Tokyo Dome. The title victory was technically a few days after 2020 ended, but the bulk of the NJPW calendar was used to build toward the championship bout. I’m sure someone could attempt to make a case for Baron Corbin as wrestler of the year, but let’s use the top guys mentioned.

In truth, as amazing as Kota Ibushi is in the ring, I don’t think he enters the discussion for wrestler of the year, simply because New Japan halted shows for 4-5 months during the pandemic so as far as 2020 specifically, there’s a much smaller sample sizes of work from Ibushi than the other two performers mentioned. Don’t get me wrong, I think New Japan absolutely made the right call when they halted shows because the health of the wrestlers, as well as the fans, should be the top priority. However, this is one of the ways that the pandemic skews the perspective on the top of wrestler of the year. For the same reason, I don’t think Ring Of Honor world champion, Rush can be taken into consideration for 2020 because ROH took similar precautions and didn’t run events for several months so there’s simply not enough work from him as compared to the other possible winners.

So, the logistics of the pandemic narrowed down a few choices from other organizations. As far as other picks from within WWE or AEW, there are a few possibilities, but it requires a more in-depth look at the topic. When you think of top stars in AEW and WWE, outside of whoever the champions are at the time, Kenny Omega and Roman Reigns will enter the discussion since the former IWGP champion was such a touted signing after the formation of All Elite, and the fact that the majority of the WWE product has been built around Reigns for the past several years. Ironically, I would consider these two just a notch below Drew and Moxley in their respective organizations for more or less the same reason.

When Kenny Omega turned heel to win the AEW title in December, it has led to some of the most interesting dynamics in the business in the past several years. The alliance with Don Callis, who was extremely underrated for the majority of his career, paved the way for the AEW/Impact crossover, which has indirectly been a way for All Elite and New Japan to start discusses for a working agreement as well. Keep in mind, Omega was involved in the tag match that brought Kenta to Dynamite as a spin off of the IWGP US title match with Moxley this past weekend on the New Japan Strong show. That said, as impressive as Omega as been as heel champion, the bulk of 2020 was spent with Omega as an upper mid-card competitor on the show, with many wondering when/if he would make his way to the main event picture. From what we’ve seen so far, 2021 might be the year of Kenny Omega, but the heel turn that allowed for that platform started at the end of 2020 so most of the year didn’t have the hype that he has generated in 2021.

The Roman Reigns heel turn in the latter part of 2020 has yielded the best work of his career, and Paul Heyman continues to prove that he’s still the best talker in the business. All things considered, regardless of his sometimes rocky status with WWE that has taken him off of television at various times over the years, Heyman’s work since Brock Lesnar returned to the WWE in 2012, puts the former leader of ECW in the ranks for one of the best talkers in the history of the business. Reigns as a heel is allowing him to evolve as a performer and he will probably eventually get over as a major baby face in the future because of this run as a heel. That said, similar to Kota Ibushi and Rush not being in the direct conversation for wrestler of the year, Roman took several months away from the WWE as a health precaution, which was completely the right decision, but again, it limits the sample of his work in 2020.

Yes, he was, but there’s more to it than just the secret Wrestling Observer poll because let’s be honest, while it’s entirely possible, it was a legitimate vote that gave Moxley the award, if the voting in professional wrestling was a work, would it be a surprise? What stipulation won at Taboo Tuesday in 2004?

After the WWE minimized his star power for the Roman Reigns super push with nonsensical booking or Shield reunions to attempt to get the crowd behind Reigns, Moxley had sometime to prove in AEW. Moxley delivers bell-to-bell and his promos create compelling television. The main event match with Brodie Lee was a quality match that solidified Brodie as a star for AEW before his tragic passing a few months ago. I thought the booking of the Eddie Kingston pay-per-view match was somewhat rushed and it might’ve been better to let Kingston further establish himself before a title shot, but the match was solid, and the promos in the build up for it were tremendous. Outside of AEW, Moxley shifted the narrative of a world champion in professional wrestling because he took a booking for Game Changer Wrestling’s Blood Sport event this past October for a match against Chris Dickinson. The AEW champion showed up to compete at an independent show. Plus, Moxley had an intriguing angle with Kenta for the IWGP US title in New Japan. I understand why a promotion would be protective of how the world champion is used outside of the organization, but all things considered, Moxley made himself a very unique commodity in the industry. Tony Khan allowed Moxley to work other shows, and while Moxley is certainly making great money from each venture, it indirectly benefits AEW as well. All Elite Wrestling is promoted as an alternative to WWE, and you certainly won’t see a WWE champion appear for a different company.

Speaking of Tony Khan, he appeared on an edition of Wrestling Observer Radio to discuss the awards. On one hand, an interview the owner of one of the national promotions is a good opportunity for Meltzer. On the other hand, it perpetuates the notion that he’s bias toward All Elite, and Meltzer knows it. I’ve never quite understood the polarizing reaction to Dave Meltzer, considering that he’s undoubtedly a great resource for the history of the business, and the majority of his work is based on his opinion so it’s not necessarily about anyone being “right” about a particular topic. That being said, too often critics of the Observer don’t realize that while he reports news, Dave Meltzer isn’t a traditional reporter. Considering that he sold tickets to fans to attend his Q&A sessions at AEW-affiliated conventions, he literally has a vested interest in the success of the company, and there’s nothing wrong with that. Obviously, Meltzer plays to his base and his makes a living from it, which is the same thing the cable news networks have done to draw ratings the past few years. More than anything, after a year of political unrest, the economic crunch, and the pandemic, it’s almost refreshing that people are arguing about The Wrestling Observer awards.