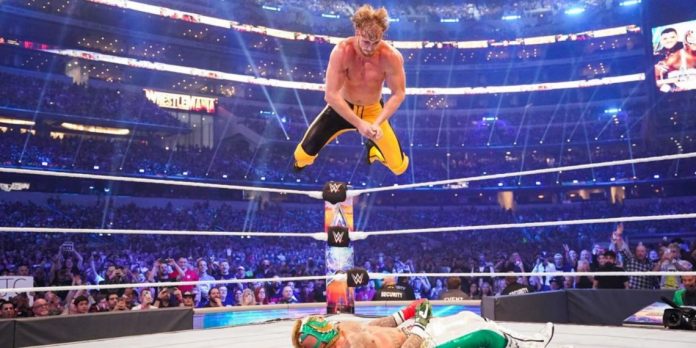 There is a question that I never imagined asking myself, not even 1 year ago, that being whether Logan Paul is meant to be a WWE superstar. However, after two matches in 2022, Logan has already proven that he is not only worthy and capable but almost a natural at the art form. The former YouTube sensation turned mainstream megastar has become a worldwide star in many facets. Recently, he has taken to the world of professional wrestling, and despite so many people doubting his ability to succeed, myself included, he has proven everyone wrong. His Wrestlemania 38 match where he teamed with The Miz to battle Rey and Dominik Mysterio was much more fun than anyone imagined, and he looked more than capable Then, a few months later at Summerslam, Logan showed out in his singles debut, having one of the better matches of the night, and one of the highlight reel moments of the night, where he battled The Miz. His frog splash from the top turnbuckle all the way to the announce table, driving Miz through it in the process, was one of the most amazing things I have ever seen. I have never seen anyone nail a frog splash at that distance, with such precision and timing, and to such success. I could obviously be wrong, but the likes of RVD, Eddie Guerrero, and Shane McMahon would all be proud to see something like that, even more so from a non-wrestler celebrity.

Now, Logan Paul is a fantastic athlete. That much has been obvious for a very long time, even before WWE. Putting aside personal thoughts about Logan overall and trying to focus on that and his potential should he stick around in WWE, it is almost a guarantee that he can find a place on the roster where he can succeed in an even greater way…but within a certain limit as far as I’m concerned.

For starters, there is almost no world where Paul should ever hold a title of any kind in WWE, most especially not the Undisputed WWE Universal Championship. That is a title that full-time, hard-working, and worthy superstars deserve. Logan Paul is not one of them. There has been no celebrity to ever make a full transition to the world of professional wrestling for any reasonable amount of time to allow for them to even have the potential to win a title, and yet it has happened before. David Arquette won the WCW Championship during the later days of the company, and it was an absolute train wreck. Now, is Logan Paul better than David Arquette in terms of physical abilities in a wrestling ring? Almost certainly, in every way, he has already proven that. However, that does not automatically warrant a title run. Logan should more reasonably stick to the one-off matches on occasion, likely at the big shows. I’m not necessarily a fan of those types of matches, but there is a place for them in the business it seems these days, and as long as they’re fun and entertaining, then I have no real complaints (case in point: Paul’s match with The Miz at Summerslam). Those would fit him well and showcase his skills while drawing mainstream interest to WWE’s biggest shows each year.

Another thing that I think is a need for Paul’s character in WWE is to work as a heel. People hate him in many ways, so being force-fed as a babyface is hard to get behind. It was passable with his match against Miz because Miz is arguably the most hated man in WWE, so they could be able to pass by. Now, there aren’t many others that Paul can get away with being the babyface against, maybe a Kevin Owens. However, there could be much more he can do as a heel against many of the top talented WWE babyfaces, the likes of AJ Styles, Rey Mysterio in singles, and even Drew McIntyre when he’s not World Champion, just to name a few. These are all guys who can be the foil to Paul’s heelish, smarmy, and detestable ways that he can easily pull off, all while guiding him to a decent, good, or even really good match.

Overall, I think that Paul does have a place in WWE’s future, but sparingly and in small amounts. Too much of him may sour his presence on the card, especially when his appearance often means that a full-time superstar or several full-time superstars may miss out on a spot because of him. Time will tell if he will stay around long, and if so, what he will do. Regardless of what he does, here’s to hoping that any future WWE appearances end up in the fun and entertaining matches we’ve seen thus far.