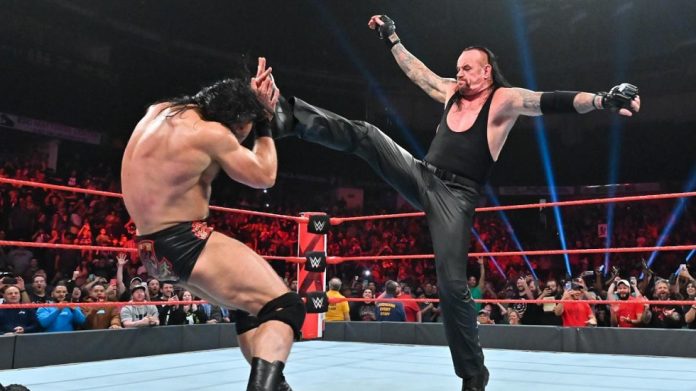 SummerSlam takes place on Sunday, August 11 at the Scotiabank Arena in Toronto, Ontario, Canada and a match between The Undertaker and Drew McIntyre is being advertised in localized commercials by WWE.

According to Dave Meltzer in the Wrestling Observer Newsletter, WWE actually doesn’t have any plans on The Undertaker facing McIntyre at SummerSlam. He still expects Undertaker to wrestle at SummerSlam, but isn’t certain.

“We’re told that is typical local market advertising and that is not the actual plan right now for the show. But in pushing Undertaker so hard, that would seem to indicate he’ll be featured on the show, which makes sense,” Meltzer wrote.

This Sunday at WWE Extreme Rules, The Undertaker teams with Roman Reigns against Shane McMahon and Drew McIntyre in a No Holds Barred Tag Team Match.

“If Undertaker was only working one summer event, it would be SummerSlam, so him coming back for Extreme Rules only made sense to set the table for a big SummerSlam match,” Meltzer wrote.

Sports Illustrated reported in June that McIntyre was “on the short list” of opponents that The Undertaker requested following his match with Goldberg at WWE Super ShowDown.