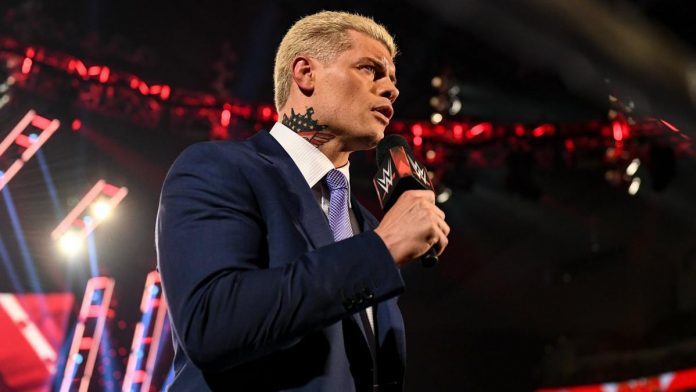 After months of speculation, Cody Rhodes made a surprise return at Wrestlemania last weekend and had a stellar bout against Seth Rollins. That was followed up with a promo this past week on Raw, where Cody explained that he wanted to win the world championship for his father, “The American Dream” Dusty Rhodes. In many ways, the story writes itself and the foundation of the narrative certainly creates a compelling angle for the future.

But, does this create an “all or nothing” scenario for Cody in the WWE?

As I penned in an article last month when PWInsider’s Mike Johnson confirmed that Cody inked a new contract to return to the company, you know that he had to be offered a big money deal from WWE if it was more cash than Tony Khan was willing to put up to re-sign one of the executive vice presidents of All Elite Wrestling. If WWE brass were willing to make that type of investment to bring Cody back into the fold then it’s a safe bet that they aren’t going to settle for a reboot of the Stardust gimmick. Basically, the corporation is going to want a return on the investment they made with the hefty contract so it’s quite literally in their vested interest that Cody is given the chance to become the biggest star possible to maximize the potential return on that contract.

However, we’ve seen a laundry list of stars make the jump to All Elite because there was a general consensus that they weren’t being used to their full potential or simply had more opportunities outside of the WWE bubble.

Even with a major contract, it remains to be seen how Rhodes will be booked for this stint.

Granted, the reaction he got at Wrestlemania was incredible, but you have to keep in mind that the fans that travel to attend the Wrestlemania events are the most diehard audience, and as trivial as it sounds, it’s easy to get the return pop from the crowd. The only way to sustain that momentum is for meaningful angles that progress so there’s a story for the audience to follow and connect with on television. While, the narrative that Cody is going to win the title for Dusty is a great story, management has to be “all-in” on Cody Rhodes if the angle is going to work.

Cody went on television for a show that garnered some of the better ratings of the pandemic era and claimed that he’s going to win the world championship, which is fine if that’s actually the plan. It’s such a sentimental moment that there’s a big upside if he can claim the belt, but if he fails to capture the championship then it’s a total letdown and the audience will lose faith that Cody will have a chance to actually progress any further than he did during his prior tenure.

Don’t get me wrong, I think Cody is a tremendous performer and a main event talent. He has all the skills needed to be a top star and he made himself a bigger name throughout his time in AEW That being said, considering that you hear on a regular basis that plans change for weekly WWE scripts, it’s difficult to believe that the office already has plans for Cody to eventually win the title after just one match back in the company. Perhaps, that’s the direction Rhodes will go on Raw, but again, after he made his intentions known on television, it’s a feast or famine scenario because anything less than a title victory is a total disappointment for an angle that was presented as a way to honor the legendary Dusty.

I genuinely hope this wouldn’t be the case, but it must be mentioned just to cover it in the discussion, but it’s technically possible that Vince McMahon offered the big cash to Rhodes as a way to improve the optics of the industry after so many former WWE talents have inked contracts to work for the alternative organization. Tony Khan might’ve signed Bryan Danielson and CM Punk, but Vince got one of the founders of the promotion to choose WWE as a better path for his career. How much faith should the fan base put in the potential of All Elite if one of the founders saw his career better somewhere else? Along with that, it’s theoretically possible that Cody isn’t given the major push and kept at a mid-card level as a way to send the message that All Elite is supposedly a secondary organization. Obviously, that doesn’t make business sense as far as the revenue that could be generated from a Rhodes push, especially after reports that his merchandise sold very well during Wrestlemania weekend, but when you take into account that the WWE already has guaranteed money from its television deals, as well as the Peacock deal that will garner record-setting profits, it’s not as though the success of Cody Rhodes is a deal breaker for the success of the company as a whole.

As I said, I think Cody is a main event guy, but until it happens, I find it difficult to believe that the WWE will truly run with him as the champion, particularly during the Roman Reigns era. Reigns, who floundered as a mediocre baby face for years, is doing the best work of his career as a dominate heel so it wouldn’t make sense for him to drop the title any time soon. Keep in mind, it’s easy to get the return pop and quite frankly, a lot of wrestlers have had good matches with Seth Rollins so I don’t think that either of those things automatically translate to success on a regular basis.

Obviously, how Cody is used and if the crowd reaction will continue remains to be seen, but regardless of what happens, Rhodes is the winner in this situation. The worst case scenario is WWE fumbles the opportunity and Cody makes the major money to either be able to retire at a young age or return to All Elite Wrestling in a few years for a fresh run. The best case scenario is that Cody wins the WWE championship and makes even more money because of it. The biggest takeaway from this entire situation is how important competition options are for the sports entertainment industry.