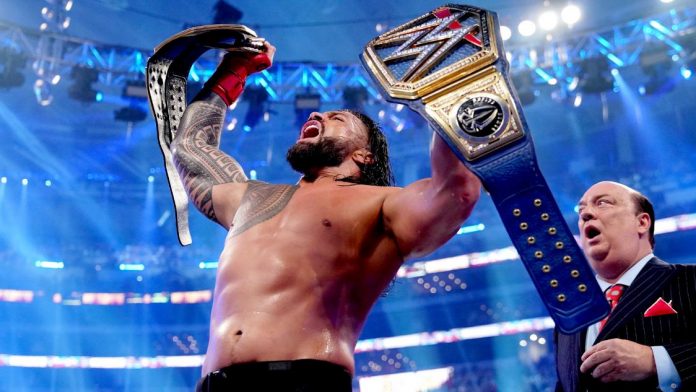 Warning, that this title is not a typo. If you have not been living under a rock, everywhere on these internet streets is wondering one thing. Who will be the ultimate chosen one to end Roman Reigns’ 600+ day reign as Universal Champion?

In the famous words of The Rock, It doesn’t matter who ends The Tribal Chief”s historic championship run. Yes, you read that right. Let that statement marinate and drink it in man. Now that your attention has been captured, you are encouraged to at least consider the following.

At times in WWE the hyperbole may not totally match the results. However, everything Roman Reigns says he is, he really is. He has backed it up with every performance, every main event, every promo segment. The eye test shows everyone that we are literally and figuratively watching greatness on a different level (GOD mode). The second generation superstar is a self absorbed villain that is a hero in his own mind. He has conquered many heroes like John Cena, Edge, Daniel Bryan and so much more. Reigns never fails to get the reaction he desires each time he steps through that curtain. Although fans want to cheer him because of his undeniable ability. They boo him because you can’t help but love hating the guy almost out of respect.

All over the internet there are theories and ideas of who deserves to be the one to end the championship reign. The reality is that Roman has built up such a once in a generation heel aura that no matter who defeats him will become a made man. Whoever that superstar is, the crowd will explode when it happens because Roman Reigns has performed so well that the audience is just dying to see him humbled. That is what great bad guys do, they establish great heroes.

WWE finds itself in a position where there is no bad booking answer to who will end the reigns. A newcomer like Bron Breakkar beats Roman, you have a top guy for the next 10 years. The hottest babyface in sports entertainment Cody Rhodes does it, fans get a memorable finale of him officially going from undesirable to undeniable. Drew Mcintyre can believably be an option to conquer reigns. That would give us a major moment to establish the Scottish Warrior in front of a live audience. Each Scenario gives consumers something to sink their teeth into. One thing that is for sure, whoever ends the reign will live rent free in the island of relevancy forever.