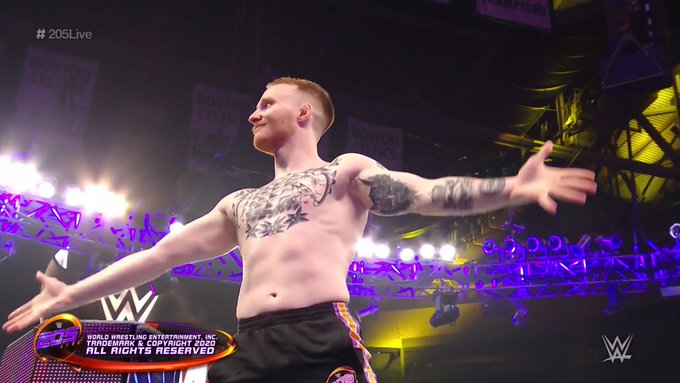 Jack Gallagher returned to WWE 205 Live on this week’s episode and debuted a new look with a new tattoo. Video from the return can be seen above.

The main event of this week’s show saw Team Captains Tony Nese and Lio Rush do battle until Mike Kanellis interfered to help his partner Nese for the disqualification. Oney Lorcan and Danny Burch ran out to help Rush, and fought Kanellis and Nese away from the ring. This led to Gallagher running out to leave Rush laying. He removed his shirt to reveal the new ink and then dropped Rush with a headbutt to end the show.

Gallagher spent the first part of this year in a min-feud with 205 Live General Manager Drake Maverick, being suspended in the storylines and then making a list of demands he wanted before he would come back to action. This week’s show was his return from that storyline which looks to have been dropped.

Below are a few more shots from Friday’s 205 Live main event on the WWE Network: