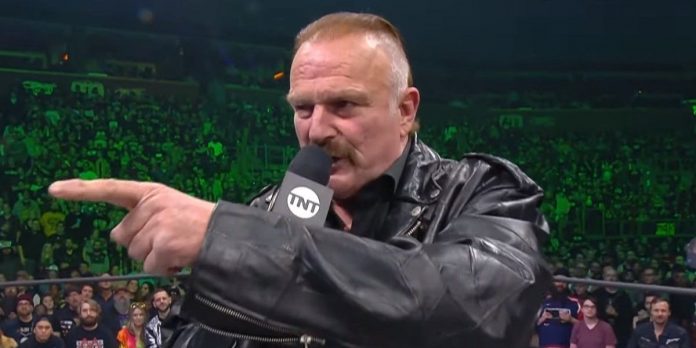 AEW’s Jake Roberts was a recent guest on Talk Is Jericho where he reflected on his experience working with AAA. This led to him once doing a promo to promote an upcoming show, where he decided to take some digs at Mexican people.

“They send me to a TV station to do some promos, I did the promos,” he said. “Back in those days, you could still have a little fun on the mic without doing something politically incorrect. Because I am not a racist at all, I love all people, I don’t care what color. I don’t see color, I guess I’m color blind, I just don’t dig that sh*t, man. I’ve got more in my life than that, I can’t stand people that are that way.

“I went and did the press thing and I was having fun, I asked the answer, ‘do you know the reason they’re having the Olympics in Atlanta and not in Mexico?’ ‘No, why,’ I said, ‘because anybody that can run, jump, or swim is already there.’ They didn’t like that, then I sang a song called, ‘The Frito Bandito.’ They thought that was bad too, so they stopped that song, they did not enjoy that one. And there may have been a couple of other little digs, I didn’t think it was really serious.”

Despite Jake Roberts not believing that the situation was a serious manner, he quickly learned that wasn’t the case. When the Hall Of Famer headed to the hotel, he found out there were fans trying to find him. That’s because they were so offended that they wanted to kill him.

“They took me back to my hotel, it was live. As I am walking into the hotel lobby, there’s a bar there in those days. I stopped, I look up, and there was a television that was in Spanish, and something caught my eye. What caught my eye was these Mexicans being sprayed with a water cannon,” he said. “Wow, this is serious brother.

Jake Roberts then recalled wrestling for AAA in LA. This ended with him and DDP being pelted with batteries and beers as the fans hated them. When they got to the back, Roberts was so hot that he destroyed the locker room.

“We did the thing in LA and we had a real hard time, Dallas and I,” he said. “We are coming out of the ring and they are unloading on us, there was no protection. They absolutely walked away from us, we were taking some heavy sh*t. Batteries hurt, they were pelting us with some horrible sh*t, it’s not fun taking some piss, or hot beer. A cold one is okay.

“They were getting very close to us, some of them were getting in some shots. Basically, we fought our way back. Well, I had asked for security before we went out there. Because there was none, I went straight for the head guy of the locker room. I was pissed, man, in those days I wasn’t very good at controlling myself because I was amped up on pharmaceuticals and things. I grabbed him and slung him around a little bit and halfway destroyed the locker room.”

(Credit to Wrestling Inc. for the transcription.)