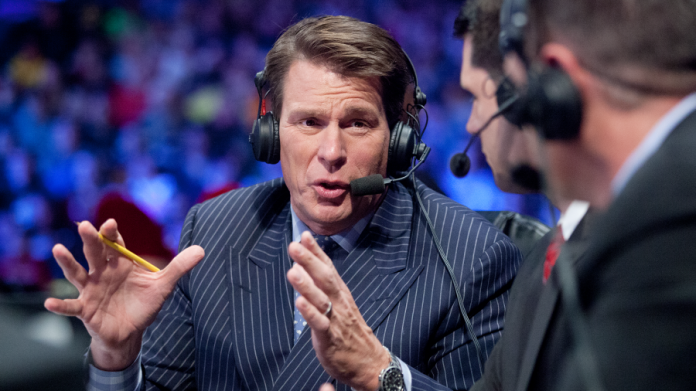 In an interview with Hannibal TV, WWE Hall of Famer JBL addressed claims that he bullied Mauro Ranallo during Ranallo’s time as a Smackdown announcer:

“We did this show called Bring It To The Table and everybody points to that show being the point of me taking a shot at Mauro. Well, on that show, before we did it, there were about three to five minutes we needed for the show. They said, ‘What can we do?’. They said, ‘Hey, there’s this internet poll that makes Mauro the number one announcer. Can you do something on that?’. I said, ‘Yeah, of course’. So I went on the show. I did a rant on the show about how they’re calling Mauro the number one announcer. He’s retweeted it, and blah, blah, blah, 100% in character, and people talk about that poll, and I was so jealous of that poll that I went on TV and talked about it. I didn’t know the poll existed until right before we went on the show and I just assumed Mauro knew that that was something I had done in character. That was just me being JBL on camera. I think Mauro took that the wrong way. I hope now he realizes that that was something that I did that was 100% in character.”

“I saw Mauro a few weeks later, everything fell out and I became the bad guy with everything, and I saw him standing by his car on his phone. I think it was New Orleans. Anyway, I walked across the parking lot and he was on his phone so I couldn’t talk to him. But I shook his hand. I just went across, shook his hand and he said, ‘How you doing, man?’. I said, ‘Good, brother’, and I just left. (I wanted to) let him know that there was no ill-intent, at least me toward him. I regret the whole situation. I wish that Mauro had known for sure. I think that was one of the things that was really upsetting. I know it was upsetting to a lot of fans because they all talked about that show.”