During the latest edition of his “Cornette’s Drive-Thru” podcast, Jim Cornette commented on the recent sexual allegations against him and his wife, and more. You can check out some highlights from the podcast below:

On denying getting athletic commissioners to harass or mistreat anybody: “I can make this statement while we’re making declarative statements. I have never asked the Commissioner or Representative of The Commission of the state of Kentucky to test, fine, suspend, harass, cuss out or in other way, mistreat anybody or do any favors for anybody in OVW or any other company here all all these outlaws here. They call the commission and bury us. I’ve applauded him a few times fining or suspending some of these promotions, but I’ve never asked him to do it. And if it ever came to needing a sworn statement from a government official, he would be more than happy to provide one.”

On his denial on offering people preferential treatment in exchange for sex with his wife: “I have never offered any wrestler, male or female, preferential treatment, a job, a contract, a push, or anything else related to their employment or threatened the same or threatened the opposite if they would or would not engage in ribbled relations with me or my wife. No quid pro quo, no tit for ta’, as they say in some of these cases. Also Brian, I made a list. Stop me if I haven’t covered anything because I made a list of all of the denials I need to make to make everybody happy according to what I’ve seen on the internet on the past several days with everybody else. No female wrestler that I ever worked with in Ohio Valley Wrestling, or anywhere else to my recollection, has ever said that I talked to them or treated them improperly, except when critiquing their matches or performance of same, but treated them improperly or with any personal or language or actions of that description. I have not been involved with anyone under legal age. I have not physically abused anybody — OK, well I’ve physically abused some men by the strictest definition of that term. I’ve hit a lot of f***ing men over the head with a tennis racket. Let me try this again. How should I say this? Well, I’m trying to be categorical here, but I can’t make that statement when I say anybody. But I’ve physically abused a lot of f***ing men, but not in a sexual way. Okay, there’s categorical. I have not physically abused any men in a sexual way, and I haven’t physically abused any women. I don’t think I even ever tatered any of the girls I worked with. Baby Doll will tell you I did one time, but that was her fault.”

On denying sending any type of inappropriate texts or pictures: “I have never sent inappropriate pics, texts, sexts, or whatever to anybody cause I’ve never sent a damn text to anybody. I’ve never done that on Facebook for the same reason. I have never slept in the same bed with a woman and not had sex with them, and it wasn’t a surprise to anybody that was involved with it when it happened. And I didn’t know that people just did that like it’s the f***ing Brady Bunch. Oh, come on over. Let’s hang out, let’s have a sleep over. We’re grown adults but we – Oh, I don’t f***ing understand. Nobody that I’ve ever known in the biblical sense has been forced or coerced in any way to be there, and all seemed happy to take part and happy when it was over with. You can take that as you will.”

On the allegations by Phil Earley: “The aspiring trainee that says Stacy tried to groom him, this is in 2017, before he managed to escape her, right, from her clutches, is somehow in actuality, Brian, a guy in his late 30s currently living in Billings, Montana. I’m not making this up. I double dare somebody to challenge me on these details. And if you’re doing some math, that means this fresh-faced, innocent trainee who came under the wiles of a wicked, wicked city woman would’ve been almost 35 years old. So, maybe that’s why his wrestling career has not worked out so well because nobody from Google on down can identify this human being as an actual professional wrestler. He may have been to wrestling school or in some way perpetrated something in a ring. He did apparently train in the OVW system at some point around 2017, and that’s — the only other wrestling connection that I’ve been able to find is that one of his social media accounts, his profile picture is a meet and greet pose with Sami Callihan. That’s very interesting.”

On no one complaining about this during his time in charge of OVW from 1999 to 2005: “According to everybody and WWE, who was overseeing the developmental part of it at that time, I pushed all the people that I should have and half the people I shouldn’t have, but everybody got a shot, and it was not given out on any fears or favors for anything. And it’s never been said before in the 15 years since. The only problem I had when it came to pushing talent was when they were telling me to push the talent was when they were telling me to push the talent that had never been in front of an audience before, that got a little unpalatable, but that had nothing to do with the accusations of which we speak. You don’t think that these guys who became the most powerful wrestlers in the largest promotion in the world, especially during a period of time where John Laurainitis wanted to get rid of me, get me out of the way here at OVW, wouldn’t it have given him some help? Wouldn’t have said, ‘I didn’t really like that this went on or so and so,’ after I was gone when I wouldn’t have had any influence? You don’t think somebody would’ve said, ‘Thank you, good job for doing that because of this.’ Or any other complaint? Any complaint about the way that I interacted with the guys, except professionally when I was screaming at them about their f***ing crummy matches was ever the subject of any complaint. This wouldn’t have come up by now, as many f***ing horrible things? Not one person that I ever supposedly made that offer to at that time, ever complained privately, publicly stated it to anybody, etc.”

On people accusing him of just having fun in his sex life: “I’m not being accused of cheating by my spouse or significant other because whenever that’s happened she’s either known about it or been there when it took place. But my own wife is not mad at me for anything. So apparently that just leaves, when you take all those other things out, fun? That’s what you’re left over with is just fun? Day-off personal time amongst friends. Fun? Isn’t everybody supposed to have their fun? You know, I bet there’s about five or six motherf***ers, I shouldn’t even use a vulgar term, but there’s about five or six individuals on the AEW roster I could question them having fun! I could question them having fun if there was a f***ing burrow from Monterrey involved, and I’d get hell and damnation sent down on top of me. Isn’t that the whole idea of all these woke people? That everybody’s supposed to have their fun? I can’t have my fun? Stacey can’t have her fun? You can’t have fun anymore? Isn’t fun what it’s all about, Brian?! I ain’t joking with you, from the professionals in the wrestling industry that have been in our hot tub that we’ve had for fifteen years, I’d say 5-6 tops. And I don’t remember any of them being contracted at the time to any major organizations. That’s what I’m saying – if you take out the manipulating people’s jobs accusation, which we’ve just basically drawn and quartered, as they say, and illustrated it was f–king caca. What you’ve got left is I’ve been charged with having an interesting sex life.”

On the source of the allegations: “Boils down to some stuff on Facebook and a picture of Stacey’s ass. And I swear to god, somebody actually said this, ‘How can this not be true?! He’s got a picture of Stacey’s ass!’ We’re not dealing with adults anymore. I don’t mean to offend anyone’s delicate sensibilities out there in podcast land, but pictures of Stacey’s ass are not uncommon. She is proud of it and rightfully so! I have taken hundreds of pictures of that ass over the years in many different locations. She doesn’t f***ing just send them out unsolicited. Like here, let me give you one of those blanket marketing texts, here’s my ass. But if the conversation veers in that direction, there’s quite a few of them in existence. So, that’s not a big deal.” 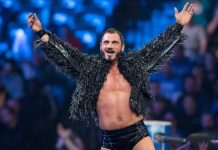 Austin Aries Speaks Out Against Having To Wear A Mask 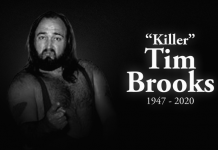