Jim Cornette is the latest to share his thoughts on the Rosemary and Sexy Star incident on his podcast, “The Cornette Experience.” He had no remorse for the Lucha Underground star, Sexy Star:

“Sexy Star, what’s her f*****g major malfunction? Do we know yet just why she went nuts and dislocated and I met Rosemary at the Global Force Wrestling tapings and she seemed to be a very nice girl so obviously I’m not trying to figure out which one we need to blame, I’m trying to figure out why this girl went nuts. I liked Cody Rhodes tweeted ‘this girl will never share any locker room of mine’ which I found was very more people oughta do that. Because that’s what we’ve been talking about lately when the boys used to when some idiot did something stupid, whether it be an invisible hand grenade and expose the business or hurt somebody, the boys would take matters into their own hands and say ‘no, you ain’t welcomed around here.’ So I’m in favor of that.

Apparently she was shooting with one of the other girls. When did the girls, what were they trained by f*****g Robinson and Gotch? What the f**k? She was shooting, fighting, however girls shoot and fight with another one of the girls, it was a six-girl tag team match I guess. Then she gets poor Rosemary who wasn’t doing anything to anybody and yanks her arm out and dislocates her arm and then they made her apologize to Rosemary in the locker room from what was reported, but then they made her leave the building because the girl she was shooting with earlier was looking to continue things which that would have been interesting to get a camera on. But what the f**k? What’s the matter with this b-***h? Apparently, she’s some big hood-de-doo and she’s hot s**t down there and has some enemies over her attitude or whatever and everybody’s asking me to comment on it so she should be boiled in oil and the fat sold for soap. There’s probably no fat on her. She looks like she’s as big around as a f*****G hiccup. Rosemary probably could have kicked her f*****g ass had she known she was fixing to be in a legitimate confrontation.” 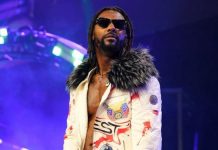