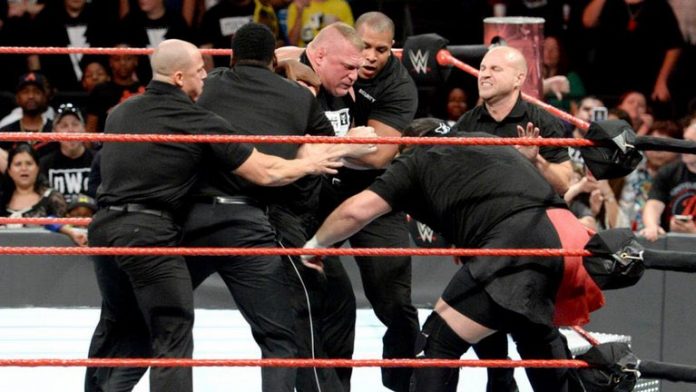 WWE Hall of Famer Jim Ross has posted a new blog on his website, JRsBarBQ.com. Here are the highlights.

On brawl between Brock Lesnar and Samoa on Monday Night RAW:

“Bravo to all involved in the Brock Lesnar-Samoa Joe confrontation Monday night on RAW as it resonated more prominently, to me, than any piece of business on RAW V in a good while. We fans are creatures of habit to a large degree and we, as a rule, dearly love to see big, tough people especially alpha males engage in physicality of which many can ony dream. Seeing Joe become the first man in memory to block a Brock Lesnar double leg takedown attempt Monday night was a pivotal moment to remember in this rivalry. Without question the Great Balls of Fire main event coming to Dallas on the WWE Network will be a sellout at the backstage TV monitors as Joe and Brock will physically bring it to level that may make some of their peers uncomfortable. SLOBBERKNOCKER level carnage!”

On Charlotte Flair vs. Natalya from this week’s SmackDown Live:

“Enjoyed the work of both Charlotte and Natty Tuesday night on SD Live. I’d be intrigued in seeing a more extended storyline between these two because I know that the match quality and the promos would all be stellar.”

“Nakamura, AJ, Sami Zayn, Corbin, KO and Ziggler all certainly earned their money Tuesday night and closed the show well in their six man tag bout promoting Sunday’s MITB Ladder match in St Louis on the WWE Network. It was a timely story leading into one of the main events this weekend.”