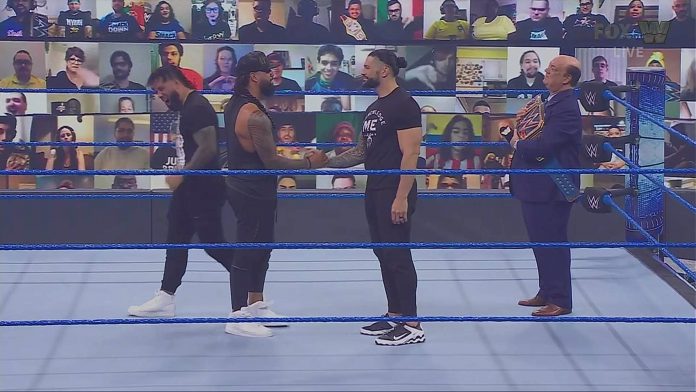 The Usos have reunited on WWE SmackDown. The opening segment of tonight’s Throwback SmackDown on FOX saw WWE Universal Champion announce the return of Jimmy Uso. He came to the ring to celebrate with Reigns, Jey Uso and Paul Heyman. Reigns introduced Jimmy after talking about he sent Daniel Bryan packing following last week’s Career vs. Title win. Reigns said Bryan wouldn’t acknowledge him, so they replaced him with someone who certainly will… that’s when Jimmy made his way out.

Jimmy has been on the shelf since suffering a knee injury in 2020, at WrestleMania 36 Night One in the Triple Threat Ladder Match with Kofi Kingston and then-SmackDown Tag Team Champion John Morrison. It was originally reported that Jimmy was expected back between November 2020 and January 2021 after undergoing reconstructive knee surgery, but Jey stated in a December 2020 interview that his brother was expected back in the ring during January or February 2021. Jey then revealed revealed in February that his brother was back training at the WWE Performance Center.

Tonight’s opening segment on SmackDown also saw WWE Hall of Famer Teddy Long make a special return for the throwback show. He announced that Cesaro will earn a WWE Universal Title shot from Reigns at WrestleMania Backlash, if he can beat Seth Rollins tonight.

DOWN SINCE DAY ONE ISH! 💯